I just ran across news that Ubuntu Kung Fu is Shipping and happened to look at the cover. As a cat lover and technical book author myself, I felt a little slighted. 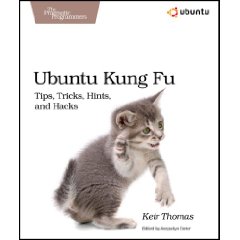 That's right. Keir Thomas got a kitten on his book.

But even better, Ubuntu Kung Fu (PDF and printed) sounds like a real winner for day-to-day Ubutnu users. As the marketing blurb says:

Award-winning Linux author Keir Thomas gets down and dirty with Ubuntu to provide over 300 concise tips that enhance productivity, avoid annoyances, and simply get the most from Ubuntu. You'll find many unique tips here that can't be found anywhere else. You'll also get a crash course in Ubuntu's flavor of system administration. Whether you're new to Linux or an old hand, you'll find tips to make your day easier.

In other words, it's a book that nearly everyone using Ubuntu could benefit from. I'm hoping to grab a copy shortly. Have a listen to Keir Thomas on Ubuntu Kung Fu in this week's Pragmatic Podcast.

A few days ago I made a new grill recipe that turned out even better than we expected, so I've reproduced it here for your grilling and eating enjoyment.

Season the steaks with a good amount of salt and pepper. Then flip the steaks and repeat on the other side. Let them marinate for 20-30 minutes while pre-heating the grill.

Clean and oil the grill. Cook the steaks on high heat for roughly 4 to 6 minutes per side, aiming to keep them pink on the inside. Do not rotate the steaks to make those nice cross-hatched grill marks. Doing so may knock off some of the mustard and seasonings.

Let the steaks sit for a few minutes. Slice and enjoy. :-)

Unfortunately, I have no pictures to show. But they're most excellent to eat. Trust me.

As of a few weeks ago, we have a computer hooked up to the 66 inch TV full-time. However, it currently has a wired keyboard and mouse, both of which are less than optimal when you'd prefer to keep your ass on the couch and pick a movie from the server upstairs.

So I'm soliciting recommendations for a wireless keyboard and mouse (or keyboard/mouse combo) that has decent range (20-30 feet, ideally) and doesn't take up too much space. The keyboard doesn't need a numeric keypad or even full-sized keys. It's only going to be used to type a small amount: occasional hits to IMDB and renaming a folder or two.

The mouse should be a reliable two or three button optical that can tolerate occasional attacks by our cats and possibly even a spilled drink.

On option that is highly rated but also highly priced is the Logitech diNovo Edge 2-Tone 84 Normal Keys 9 Function Keys USB Bluetooth Wireless Mini Keyboard. Reviews claim is has excellent size and range. But the touchpad mouse seems a bit funky. However, I do like the idea of it being built-in so there's only one object to deal with.

Thanks in advance,
Jeremy

Never Buy a House from a Realtor

There were numerous cans of paint in the garage that the previous owners had left behind. And since the house had mostly white walls, it seemed like a pretty trivial task. We got out the paint, spread the plastic and sheets, stirred, poured, and started putting paint on the walls.

After a bit of painting it became apparent that were we not using the right color. Apparently there was more than one white used in the house. This wouldn't normally be a problem. But as part of the painting we decided to touch up a few other walls in other rooms of the house. It looked fine while the paint was wet. But as the paint dried, we realized that there were actually three or more different flavors of "white" in use around the house.

Realizing what pain in the ass this could turn into, we opted to chip a bit of paint off the affected walls, take them over to our neighborhood Orchard Supply Hardware, and get them to match the color.

They did an excellent job. The touched up spots look fine. And the colored paint we got for the previously repaired wall looks great. (Oh, we decide to use a non-white color after we realized the "white" was all wrong.)

So you're probably wondering what this has to do with realtors.

Realtors know what it takes to sell a house. They know where they can cut corners and get away with it. After thinking about it a bit, I realized what the previous owners of our house must have done. I suspect that they hired some cheap painters and asked them to bring along any leftover white paint from previous jobs.

They did. And they used one white for one room, a slightly different white for the next, and so on--thereby using up the extra paint and not having to spend a whopping $12/gallon to repaint the house before selling it.

I can't think of any other reason why someone would paint different rooms using shades of white that are just different enough to be different. It just doesn't make sense.

But to make matters worse, they didn't bother to label the spare cans so we'd know which room the colors applied to. At least the spare paint can I put away after we were done have things like "living room" or "bedroom" written on them in black marker.

I'm thinking about ways to store archival data for the long term and wanted to solicit anyone who's been down this road for some input, advice, warnings, etc.

Essentially I'm dealing with a system where "live" and "recently live" data is stored in a set of replicated MySQL servers and queried in real-time. As time goes on, however, older "expired" data is moved to a smaller set of replicated "archive" servers that also happen to be MySQL.

This is problematic for a few reasons, but rather than be all negative, I'll express what I'm trying to do in the form of some goals.

There are a few high-level things I'd like this archive to handle based on current and future needs:

Pieces of a Possible Solution

I'm not sure that a single tool or piece of infrastructure will ever solve all the needs, but I'm thinking there may be several open source solutions that can be put to use.

You'll notice that this involves duplicating data, but storage is fairly cheap. And each piece is especially good at solving one or more of our needs.

While it involves some data duplication, I believe these pieces could do a good job of handling a wide variety of use cases: real-time simple queries, full-text searching, and more intense searching or statistical processing that can't be pre-indexed.

So what else is there to consider here? Other tools or considerations when dealing with a growing archive of data whose structure may grow and change over time?

I'm mostly keeping discussion of storage hardware out of this, since it's not the piece I really deal with (a big disk is a big disk for most of my purposes), but if you have thoughts on that, feel free to say so. So far I'm only thinking 64bit Linux boxes with RAID for MySQL and non-RAID for HDFS and Sphinx.

I've been hacking on some Perl code that extracts data that comes from web users around the world and been stored into MySQL (with no real encoding information, of course). My goal it to generate well-formed, valid XML that can be read by another tool.

Now I'll be the first to admit that I never really took the time to like, understand, or pay much attention to all the changes in Perl's character and byte handling over the years. I'm one of those developers that, I suspect, is representative of the majority (at least in this self-centered country). I think it's all stupid and complicated and should Just Work... somehow.

But at the same time I know it's not.

Anyway, after importing lots of data I came across my first bug. Well, okay... not my first bug. My first bug related to this encoding stuff. The XML parser on the receiving end raised hell about some weird characters coming in.

Oh, crap. That's right. This is the big bad Internet and I forgot to do anything to scrub the data so that it'd look like the sort of thing you can cram into XML and expect to maybe work.

A little searching around managed to jog my memory and I updated my code to include something like this:

And all was well for quite some time. I got a lot farther with that until this weekend when Perl itself began to blow up on me, throwing fatal exceptions like this:

My first reaction, like yours probably, was WTF?!?! How on god's green earth is this a FATAL error?

After much swearing, a Twitter plea, and some reading (thanks Twitter world!), I came across a section of the Encode manual page from Perl.

I'm going to quote from it a fair amount here because I know you're as lazy as I am and won't go read it if I just link here. The relevant section is at the very end (just before SEE ALSO) and titled UTF-8 vs. utf8.

The sound you heard last night was me banging my head on a desk. Repeatedly.

I mean, how could I have possibly noticed the massive difference between utf8 and UTF-8? Really. I must have been on some serious crack.

Needless to say my code now looks more like this:

Actually, I was kidding about the "fuck!" I wouldn't swear in code.