The Leak, Day #3: Leak Found, Pictures, Showering with a 90 Foot Hose, and other Fun Tidbits

Well, I managed to wake up at the crack of 6am so that I'd be semi-coherent when Robert and Victor (the leak finder) came by at 7am. They were right on time, too.

They pulled a big hose into the house and hooked it up to the hot water line. The idea was to blow air through the system and listen for leaks. Victor used what I can only describe as a plumber's stethoscope. It's like a normal stethoscope except that instead of a little metallic disc on the end, it actually has two long rubber tubes with larger discs on their ends. He puts them on the floor and listens to pinpoint the leak.

I should have taken a picture, but well... it was early.Anyway, the good news is that he found the problem. The bad news is that there are multiple leaks, which means the galvanized pipe is likely shot. Rather than jackhammer into the floor and patch them up, the real solution appears to be re-plumbing the house to bypass the degrading galvanized crap.

That's about $4,500 worth of work, I'm told. I confirmed this with a friend who has recently been through a similar job.

After finding the leaks, Victor pulled out a new device to map out where the pipes are. It's like one of those wands they use to detect guns in your pocket at the airport--only much bigger. He puts a couple of electrodes on the pipes and then uses the wand to pinpoint their location. He put blue tape on the floor to note where the pipes and junctions are.

If nothing else, I'm getting a good plumbing education in the process.

I told Robert that I'd like to get started ASAP. He said they'd checkt he schedule and call me shortly.

Michelle (from AC Plumbing) called me a few hours later and said, I kid you not, "Hi, this is Michelle from AC Plumbing. We're ready to rock on your plumbing work tomorrow." Apparently they're arriving at 7am to being "exploratory cutting." Robert explained this while he was here. He needs to get into the walls at several places to get a more precise idea of where to put the new pipes. Once they've done that, they can get started on the real work of putting the pipes in place.

A claims representative called me this afternoon (I was expecting a visit). Based on all the advice from everyone yesterday, I explained to her that this was a misunderstanding. I wasn't trying to open a claim--I merely wanted to get some questions answered. So she killed the claim paperwork and answered my questions.

The insurance company is officially off the hook now.

Around noon I had a brainstorm. Or maybe just a light drizzle. See, I was thinking about the water heater. 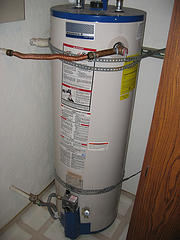 And then I remembered the valve near the bottom of the tank. 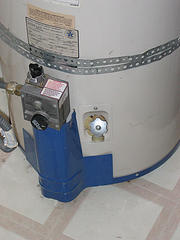 And I realized that it's the same size as those you'd hook up a garden hose to. 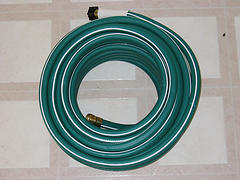 So I thought about how much hose I'd need to get hot water up to the nearest shower. I figured 75 feet ought to do it. So I ran off to Orchard Supply Hardware (it's only 2 miles away) and bought a 90 foot hose and nozzle to go with it. 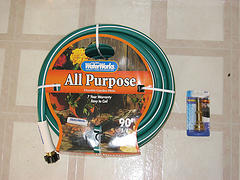 I then attached the hose to the tank. 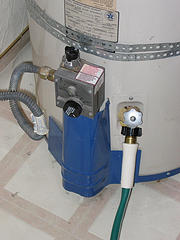 And ran it upstairs into the bathroom. 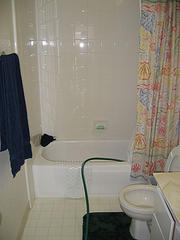 And into the bathtub. 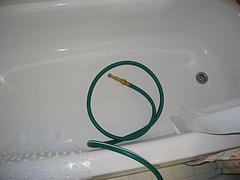 There were two remaining issues:

Hooking directly up to the tank, I knew there'd be no trouble getting water upstairs. There are no leaks before the tank, so that was easy. But I didn't want to turn the water on too hard. Having the water actually hurt in the shower would suck. So it took about 5 minutes of trial and error: try a setting, run upstairs to see, run back down to adjust, repeat.

The temperature would be more tricky. It's like solving math problems about the space shuttle's fuel tank. The longer the engines burn, the lighter the craft gets and the less fuel you need.

I had to turn the temperature down a bit on the tank and let out some hot water out. My theory was that the cold water that'd flow in to replace the hot would bring the overall temperature down enough that I wouldn't burn myself. And, if I didn't use too much water showering, I should be able to do the job without running out of warm water.

I actually got a decent shower out of the deal. Yeay!

The only problem was that the seal between the hose and the spout wasn't 100% closed. So there was a bunch of water on the floor around the water heater. I used an old blanket to soak most of that up. I consider it a small price to pay for a semi-warm shower.

Man - this has been a terrible week for you. glad to see that you're still keeping a positive attitude. I notice you didn't mention any possible damage from the multiple leaks - has anything rotted out?

Heh. Yeah, no sense getting all worked up about things that you can't change.

If any damage has been done, it's that some dirt would have been washed away from the under the slab. Right now I have no way of knowing that.

Ah, water problems is when I learned gym memberships are handy for more than just sweating!

After following this saga, I'm somewhat surprised you haven't just checked into a hotel by now.

At risk of pissing off the now-for-sure-edgy Jeremy... this saga is becoming entertaining. :D

Of course it is.

Would I have spent 45 minutes documenting this if it wasn't somehow amusing?

Don't forget while you're going through this, Y! showers are available in the gym, and I've yet to find the end of the hot water.

Glad to hear you at least have a grip on your plumbing situation ... it really does suck being a home-owner sometimes.

While it's a good solution, it's definitely not a semi-permanent one. You may want to think about replacing the bottom hose with one that can take higher temperatures, otherwise it might just rupture from getting too hot.

Uh, the water is not hot. It's very warm.

Heck, the hose would be hotter on a summer day on the back patio.

Well I, for one, wouldn't have found this entertaining if I were in your shoes. $4500 ain't nothing to sneeze at, even if you do make good money. Having your house replumbed is ultimately probably a good thing but you have to endure the frustrations until it's done. At least you seem to be the kind of guy that isn't a control freak. The fact that you are not in control in this situation and it doesn't bother you proves that.

Life's too short to sweat this kind of stuff.

Bur you're right, I'm not happy about dropping that kind of cash on this.

Glad we won't be reading about this in the Darwin awards for 2005...

Technically, that little valve at the bottom of the water heater is for emptying it out when it has a problem, although now I guess you might've proved me wrong. ;-)

It is made exactly for hooking up a water hose (again, so I thought, for emptying it out)...but for ours to work, it had to run out to lower ground (in order to start up a siphon-action). Maybe when the tank's not broken and spewing out water, it's got enough pressure, dunno. Our old water heater had a full-out valve on it, but our new one just has a cheap plastic one, without a real knob - you've gotta stick a screwdriver in the hole and turn it. So my guess is they're not really supposed to be used to run water out directly - the cheap plastic one would be worn out after one use.

And yes, I know all this from first-hand experience. To think, I thought it was frustrating just to have a new water heater put in - I can't imagine what you're going through. Damn.

Inquiring minds want to know, has your plumbing been fixed yet?

PS, a few years ago, as part of a house remodel, we switched all our supply lines from in-slab to the walls and attic. As I recall, our plumber who was normally quite civil went on a 5 minute rant about the evils of plumbing supply lines in slabs...

Jeremy, I suffer from a bad case of having lived through fifteen years in the Property/Casualty Insurance Claims business. What they call a bad case of career-booboo-idous. But it's all in the past now. The wounds are healing.

In any event, the "destructive testing", also known as "ingress/egress" to gain access to the galvanized pipes, is most likely a covered item under your homeowners' policy, even though the actual piping may not be covered. Wear and Tear is not a covered item, but gaining access is generally considered part of the investigative disposition of the claim. When you open your claim up, ask for a copy of the policy. You should be able to find the exclusion and the giveback for this coverage. The policy is less than 15 to 17 pages in length.

The majority of the expense, from the $4500 "rock out!" plumbers bill...SHOULD be covered by your carrier.

The $275 charge for the leak test...Is also covered (keep your receipt), and you should submit it with your claim.

I hope this proves helpful.

Silver lining? You water heater will last longer because you temporary solution is sort of close to draining the tank repeatedly...hopefully that will shake out some of the setiment at the bottom...might even a bit more efficiently!

I've filled up the little plastic toddlers pools for years from that valve at the bottom of my water heater...makes for warm water for the kids to play in while doing ongoing "maintenance"

You got to have a sense of humor in this world...a bit of delusional believing it might have been for the better always helps too. Might call up Geico for the good news now that you were focussed on insurance issues? ;-)

Your dip rod must be ok on the water heater if the water is only warm not hot...that means that the new cold water you're putting in is getting to the bottom and you're taking it out before it has a chance to warm.

Things could have been worse if the water was leaking inside the house and not harmlessly into the concrete and soil....a yahoo news link: http://story.news.yahoo.com/news?tmpl=story&cid=816&e=5&u=/ap/20050124/ap_on_fe_st/moldy_mail

on January 24, 2005 10:37 PM
Disclaimer: The opinions expressed here are mine and mine alone. My current, past, or previous employers are not responsible for what I write here, the comments left by others, or the photos I may share. If you have questions, please contact me. Also, I am not a journalist or reporter. Don't "pitch" me.
Privacy: I do not share or publish the email addresses or IP addresses of anyone posting a comment here without consent. However, I do reserve the right to remove comments that are spammy, off-topic, or otherwise unsuitable based on my comment policy. In a few cases, I may leave spammy comments but remove any URLs they contain.