AdSense CPMs by Referral Source for a Day

It's been about a year and a half since I wrote Following the Search Engine Referral Money Trail, which looked at my traffic sources from an AdSense earnings point of view.

Realizing that I hadn't been keeping good tabs on it, I decided to use last night's closing numbers (well, from 15 minutes until midnight) to get a one day snapshot of the eCPM values for my AdSense referral tracking channels. Here's a screenshot with the irrelevant columns removed. 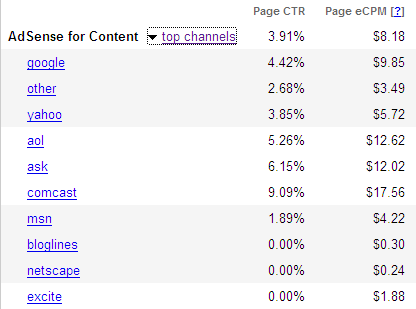 I really need to figure out how to attract more Ask.com, Comcast Search, and AOL users! Apparently the MSN Search users that used to monetize really well a couple years ago have migrated to another search engine. Good for them!

There's clearly a lot going on behind these numbers and it is only one day's worth of traffic. From what I've seen in the past, the fact that this is data from a weekend (and a Sunday) is quite significant. It might look different on a Wednesday, for example.

What hasn't changes since last time is the large variation among all the sources.

Anyway, I just thought I'd see if anyone else is doing similar analysis on their own personal sites.

Don't you think I've removed enough essential information to render this information pretty useless to anyone trying to reverse engineer what's going on? It's not like I also gave out traffic numbers or earnings data...

Actually, Google allows you to disclose earnings, but not CTR for whatever reason. However, I suspect that they won't crack down on you.

CTR from source is an interesting stat. First time I've read about anyone doing this. However, while Google's eCPM is 56% of Comcast's, I suspect that Google probably kicks you more traffic than all the other referral sources combined.

Right. Without either traffic or earnings data (and even some URL data) this is only interesting but not terribly useful.

Maybe you could explain the numbers a bit more? What is eCPM?

Interesting... do you only track channels based on referals criteria, or do you have other channels which you aren't showing?

BTW, I had never heard of anyone tracking their AdSense performance based on search engine referals... it would be even more interesting to see the data collected for a full week...

Care to share how you track the source of your clicks in the Adsense report?

"Ken said: Interesting, but...
"You agree not to disclose Google Confidential Information..."

BTW, maybe it is just me but Google's TOS on sharing little details like how we're doing CTR wise et al is suspect and over the top. It surprises me we all take it, I guess when we join the "Church of Google" we're willing to accept these small intrusions for the right to sit in their pew.

How do you get such a high CTR? Would you mind sharing that.

on February 20, 2010 04:35 AM
Disclaimer: The opinions expressed here are mine and mine alone. My current, past, or previous employers are not responsible for what I write here, the comments left by others, or the photos I may share. If you have questions, please contact me. Also, I am not a journalist or reporter. Don't "pitch" me.
Privacy: I do not share or publish the email addresses or IP addresses of anyone posting a comment here without consent. However, I do reserve the right to remove comments that are spammy, off-topic, or otherwise unsuitable based on my comment policy. In a few cases, I may leave spammy comments but remove any URLs they contain.

previous
Spock sign-up flow demonstrates how to scare users away...

next
Is SnapFish Completely Useless?