Or is it just me?

First I had Spock trying to borrow my passwords and now SnapFish won't let me see the pictures that someone is trying to show me. And their UI and language are completely puzzling.

First I get an email on behalf of someone who scanned in a few documents I need to look at. It came from "HP Photosmart Share" and has a "View Larger Photos" link that bounced me over to photosmart.hpphoto.com (since putting the actual photos in the email would be too much like rocket surgery, I guess). 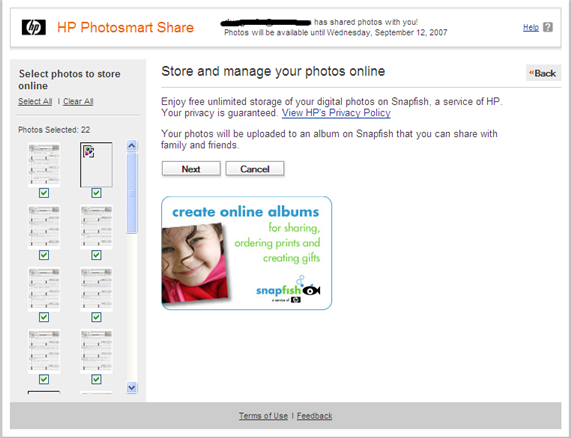 First off, the broken image in the series of thumbnails is not inspiring. But I put that aside and read the text. Apparently HP has my photos but won't let me see them until they're uploaded to SnapFish. WTF?!

Why weren't the uploaded and ready for my arrival?

Okay, so I have to click the "Next" button to start that process. I do that and am asked to sign in to SnapFish.

Grr. I then go through the password recovery process (since I've only used it once ages ago) and continue on a few minutes later.

A pop-up (again, WTF?!) appears that looks like this: 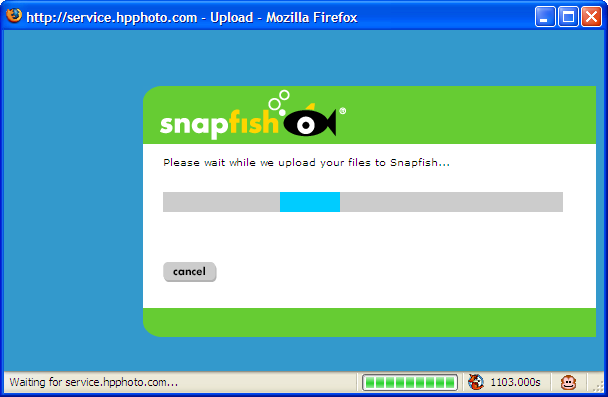 Except that it's "animted" a bit but you can't see that in a single screenshot. Notice the Fasterfox timer in the bottom right of the window?

Yeah, I've been waiting over 18 minutes to get my damned pictures!

Actually, it's up to 35 minutes now. I let it keep running while I'm typing this. And, of course, this isn't my first attempt. It's my third. I've tried this twice already earlier today.

How the heck am I supposed to get my pictures? Why doesn't this "smart" software just put them in the email so I can see them when I get the message? Attaching JPEG files to an email message is hardly advanced technology, folks!

I'm starting to get the feeling that HP wasted some serious money by buying SnapFish.

Some days I just want technology (and the marketing people who make decisions like that) to get the heck out of the way so I can get the things done that I need to get done.

I got some pictures like that emailed to me recently. The trick is to hit the CANCEL button, which bypasses the requirement to sign up for their account. I was then able to see the pictures immediately. Yeah, isn't that intuitive?

Despite my disbelief, that actually worked. Thanks for the tip!

Now, who can tell me how to slap the SnapFish people? This is crazy...

This is why I use flickr. Flickr rocks, its very easy for me to use, and it has a cool iphoto plugin. Yahoo was right on with buying flickr. It's my favorite photo tool so far.

Joe: I'm with you on that one. I've been a Flickr fan since the first time I used Flickr...

Huh. Saberworks, I tried that with an album someone emailed me recently, and there is no cancel button on the page. Just a picture of the album, a few form fields to create an account, and a "continue" button. I deleted the album and won't look at it. Snapfish is a piece of crap.

I attempted to sign up for YouTube last night, and none of the confirmation emails I tried to generate to any of three email addresses turned up.

Just wondering, would it not be easier to tell the person who emailed you with the photos in the first place to send it in a different way? Snapfish is disgusting. Been a long time since I viewed photos on that site. Too slow, too cumbersome, very unintuitive. Just let me see the photos, goddamit.

Snapfish is fine for a straightforward prints order (as long as you remember to size your photos to the appropriate aspect ratio). Tabblo -- another HP property -- is a usability nightmare.

Flickr is good for lots of things, but its privacy/photo-sharing management isn't nuanced enough, and it doesn't offer printing.

I've noticed a fair number of people using Picasa... any thoughts before I take the time to familiarize?

Actually, Flickr does offer printing. It's been there for quite some time now.

Sounds like a pretty frustrating experience, and it seems like getting the UI and the process flow right here should only be a matter of listening to end users and making iterative changes.

Here's another snapfish complaint. I ordered 210 prints. I had about 5 "albums" stored on the site. These albums were organized. I made the mistake of assuming that the photos would arrive in order--by album. NOT. Nope, instead a big pile of 210 photos arrived in a jumbled order. Never again.

And, after writing snapfish my feedback, they emailed me 2x to ask had anything been done? No actual reply to my email...just the question and then a repeat of my email to them. Pretty lame.

SnapFish SUUUUCCCKKKSSS AASSSSSSSS... they tell you it's free.. yeah right.. until you put all your pictures on there.. then they say.. oh.yea... we forgot.. you have to pay us money if you ever want to see you precious photos again... and no.. you can't switch them to another site.. cause we're fuckin the most retarted picture hosting site ever made... fuck snapfish!.. god damn peice of shit motherfuckers.. and that's what i think about them....

While I agree with you, here is the reason to not ever ever use Snapfish. They don't send you your order. I left one month of time for Christmas gifts to arrive from Snapfish. I have squat now to give for Christmas. My son had good experience with Flickr and he has something to wrap for gifts. I have nothing but frustration and that's hard to wrap for Christmas. Snapfish is the worst thing to happen to Christmas. Avoid them. Thanks for your heads-up but I didn't see it until Snapfish had my money.

Avoid Snapfish, poor quality work and no resolution on complaints. I sent in a roll of 35mm film (yes I still shoot film) to see what their service is like, well save your money and go somewhere else. The negatives came out fine, but the prints are terrible, there are clear horizontal stripes on the prints and their so called high resolution scans show the same marks, plus some additional blotches - I can only think that this is dust on their machines. They offer high resolution digital images on CD-ROM, what you actually get are 96dpi low res scans, hardly good enough to print on your own inkjet printer - and they charge $4.99 for this service.
Their response has been that they see no problem with the prints or scans.

I live in Spain and Spanish Snapfish service is useless. Sent them just 20 digital pics over the web using a 'tryout' offer
from McDonalds and after 5 weeks waiting and complaining they send me two sets of somebody elses photos! What class of inept people do they employ. They should change the name of the company to Crapfish.

on October 2, 2009 07:05 AM
Disclaimer: The opinions expressed here are mine and mine alone. My current, past, or previous employers are not responsible for what I write here, the comments left by others, or the photos I may share. If you have questions, please contact me. Also, I am not a journalist or reporter. Don't "pitch" me.
Privacy: I do not share or publish the email addresses or IP addresses of anyone posting a comment here without consent. However, I do reserve the right to remove comments that are spammy, off-topic, or otherwise unsuitable based on my comment policy. In a few cases, I may leave spammy comments but remove any URLs they contain.

previous
AdSense CPMs by Referral Source for a Day

next
A Day at Pine Mountain Lake