Plane Crashes on a Google Map

For a while now, the FAA and NTSB have been recording the GPS coordinates of aviation accidents. So it was probably just a matter of time before someone made a mashup using the data, right?

Wait no longer. The folks at Aviation Marine Insurance have done just that with their AVCRASH map. 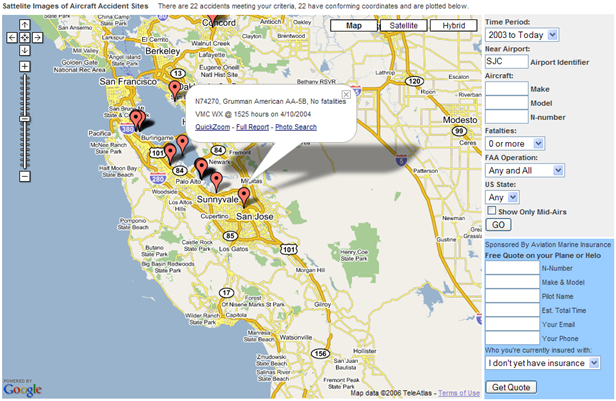 You can limit the search by year, location, aircraft make/model and N number, fatalities, and so on. Cool stuff. The screenshot above shows all 22 accidents in the vicinity of the San Jose airport from 2003 until today.

Nice find Jeremy. I submitted AVCRASH to Digg as it's worth Diggin'

Well that's smashing.
It is indeed very helpful information. It will be very useful to all those who spend half of their life traveling.
Also for those people who have never traveled or travel very rarely.Now you can get all the information you require to fly safely.

Your blog is getting too popular.

Well, it WAS useful, until it hit Digg. Now it's gone.

I don't get one thing though, how does this make us more safe? Dane White mentions that this is the kind of information you need to fly "safely". Why is that?

Unless we assume that it's rather impossible for a plane to crash twice in the same route so if there's already been one accident you should be fine :P

Is this just limited to crashes in USA?

Yes, the FAA and NTSB are only involved in US-based accidents (unless requestd, I imagine).

Legionnaire - Funny you should mention that. A year ago, we interviewed a celebrity photographer that had been involved in a helicopter crash into Lake Havasu on a photo shoot. He claimed that he had calls from several pilots that wanted him to tag along on the theory that nobody's luck could be bad enough to crash twice!

on January 4, 2007 06:53 PM
Disclaimer: The opinions expressed here are mine and mine alone. My current, past, or previous employers are not responsible for what I write here, the comments left by others, or the photos I may share. If you have questions, please contact me. Also, I am not a journalist or reporter. Don't "pitch" me.
Privacy: I do not share or publish the email addresses or IP addresses of anyone posting a comment here without consent. However, I do reserve the right to remove comments that are spammy, off-topic, or otherwise unsuitable based on my comment policy. In a few cases, I may leave spammy comments but remove any URLs they contain.