I was cleaning up some email recently and decided to click on what I believed was a poorly targeted advertisement. It really wasn't interesting, but I was curious to see what page it led to. I figured that might give me an idea why it was selected in the first place.

Okay, so I should expect to see a page that contains info on a lot that's for sale in Los Altos Hills, right? 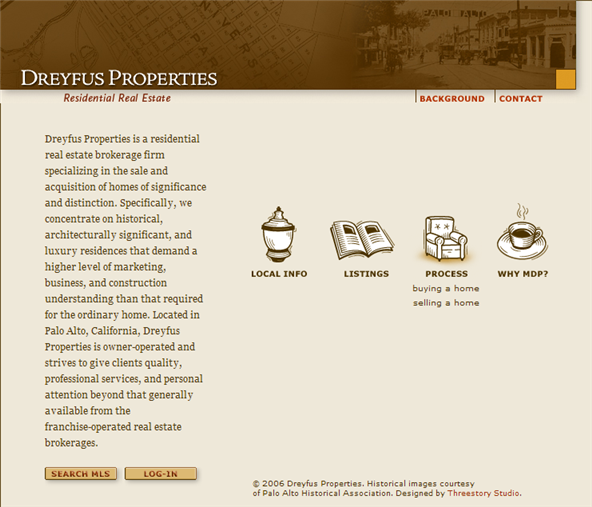 What a waste of modern technology. I should have been linked directly to the property they were advertising, not their front door.

AdWords advertisers need to realize that having relevant ads is only half the battle. If the landing page isn't also relevant, you're going to lose people.

So true! I am constantly amazed at what I consider to be advertising money completely wasted.

I often search for a doohickey, see an ad for doohickeys, and click, only to be taken to the front page of some on-line store that sells every product known to man, where it might take five clicks to drill down to the doohickey section (if you can even figure out where that might be). I usually give up before that.

The other day I clicked through an ad only to see a page that said "Registered Users Only!". I don't understand why someone would pay for a click-through, only to tell them to go away.

Did it occur to you that maybe they didn't actually have a live listing for a lot and were just trying to drive traffic to their website? :)

Yes. But it doesn't change my sense of disappointment.

Yes, I understand your sense of disappointment, Jeremy. Doing a search with four-year-old's name, I was excited to see that there were "Books on Anthony Friedl" and "Great Deals on Anthony Friedl", only to have my excitement dashed when I clicked on them. :-)

'Los Altos Hills Real Estate' is probably an expensive click. If I were Dreyfus, I'd be targetting stuff like 'Red Herring' and 'El Camino tax advisor' to get some less costly leads. You might not get the same urgency of purpose, but you could get a thousand page views for every 'Los Altos Hills Real Estate' page view. There are two targets of advertising, branding and immediate sales. Branding cannot be ignored because it represents future sales. Despite the fact that you had no intention of purchasing real estate in Los Altos Hills tomorrow, you live in the valley, you have become aware of this merchant, and spread the name for more to see. People will now come to _your_ site to find Los Altos Hills properties and then see Dreyfus. It probably costed less than a buck for your click.

I would rate the campaign as effective.

Looks like Google is launching something to address this:

Basically, it looks like you'll be able to do A/B testing w/ your landing pages, I image exactly for the reasons you stated. (Only reason I know about this, is my brother started @ G this week, and that's what he'll be working on.)

I've seen this ad before. It used to have a valid landing page. At some point, the property for sale went away and so now it just redirects to the main Dreyfus page. The "correct" thing for them to do is to take down the ad, or retarget it, but it's not necessarily so surprising that they don't get around to it. The free web has plenty of broken links that used to work, why not the paid web? :-)

on November 15, 2006 01:46 AM
Disclaimer: The opinions expressed here are mine and mine alone. My current, past, or previous employers are not responsible for what I write here, the comments left by others, or the photos I may share. If you have questions, please contact me. Also, I am not a journalist or reporter. Don't "pitch" me.
Privacy: I do not share or publish the email addresses or IP addresses of anyone posting a comment here without consent. However, I do reserve the right to remove comments that are spammy, off-topic, or otherwise unsuitable based on my comment policy. In a few cases, I may leave spammy comments but remove any URLs they contain.