I must have missed the microfiber revolution. The other day I mentioned my visit to Costco looking for some micofiber towels that proved to clean a glider canopy exceptionally well (compared to the towels I used to use). Well, I'm happy to report that they work very well for cleaning flat panel LCD monitors, TVs, windows, and basically everything else I've tried. 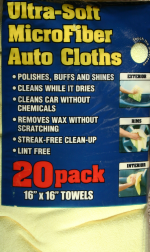 I can't wait to try them out on the inside of my car. It desperately needs cleaning on the windows and dashboard.

So if you're looking for some most excellent cleaning towels cheap, Costco has these Ultra-Soft MicroFiber Auto Cloths. The picture at the right is a snapshot of the bag. I nearly walked past them twice, so keep an eye out for the yellow towels in the blue bag. IIRC, they're $9.99 for a 20 pack.

I also snapped a picture of the flip side and have larger versions of the front and back available as well. Overkill, yes, but what the hell.

I never thought I'd get this excited about cleaning supplies. But then again, I also really like my Dyson DC14 Animal too. :-)

Now, here' what I'm wondering. Had I completely missed the boat on this? Or are these towels actually a well kept secret?

I haven't seen people with loads of microfiber cloths in their garages, but companies have been giving out stuffed animals with microfiber tummies as swag for the past few years.

Microfibre cloth is by far the best way to clean most gunk off of camera lenses too. Lint free, soft, and seems good at polishing off things that are mildly stuck on without using any cleaning fluid. Camera stores sell little 10" squares of the stuff for about $6. Microfibre; the miracle cloth!

Typically, they're machine-washable too although they usually recommend that you NOT use fabric softener. It apparently interferes with their fiberous nature.

Well, I've long known about using chamois to clean glass, especially camera lenses and the mirror inside SLR cameras, where you don't want to scratch the surface or leave dust/lint behind. Of course, chamois isn't cheap, because it's a kind of leather ... and some people object to rubbing things with antelope ass.

Microfiber cloth is probably a good substitute for chamois, and if you can get a 20-pack for under $10, that's ridiculously cheap.

I discovered the Costco microfibers about a year ago. Before that, I was always buying the softest terrycloth I could find for my canopy, and using only once or twice before I deemed it not soft enough.

Costco also sells some microfiber hand mits. I think the towels are a better deal though.

No Mark, it's
Ding!
Your skill in Cleaning has increased, Cleaning skill 50!

No, I mostly "missed" it too, although my SO has been using them for years and mocks me roundly when I say that I missed the "revolution".

I have a "question" does it creep anyone else to touch them?

I mean they seem to clean _really_ well, but I hate the way they feel on my hands.

I saw that someone above commented that they've been doing teddy-bears with them. This would send me screaming from the room. (Or at least I wouldn't want to touch it)

Just don't wash your microfiber or soft terrycloth towels with powdered detergent, lest some grains of detergent remain in your cloth and scratch whatever you're polishing.

Just picked some up today. I'm glad I got the right ones, since I couldn't remember what they were called when I was at Costco. There are in the auto section.

I am from China, and we are a factory dealing with microfiber cloth for many years. I even did not know what is microfiber until I delt with it September this year. I came to know its magic power of removing the dirty. And it is softer than the cotton one, so a few days ago, I bought a bathrobe in the shaopping mall myself. As It is not popular in China, so it costs as much as328RMB, which equals to 10 clocks hung in the wall. But it really feel well.
Any buyer with interests , please email me.

I've been looking for the best quality and price for these cleaning cloths and I am happy to discover that I can get them at Costco. The price is less than most companies charge just for shipping!
Thanks for the tip.

on May 10, 2009 02:28 PM
Disclaimer: The opinions expressed here are mine and mine alone. My current, past, or previous employers are not responsible for what I write here, the comments left by others, or the photos I may share. If you have questions, please contact me. Also, I am not a journalist or reporter. Don't "pitch" me.
Privacy: I do not share or publish the email addresses or IP addresses of anyone posting a comment here without consent. However, I do reserve the right to remove comments that are spammy, off-topic, or otherwise unsuitable based on my comment policy. In a few cases, I may leave spammy comments but remove any URLs they contain.

next
Tom's Future of Web Apps, Translated for Product Managers