Podcasts from The Long Now Foundation 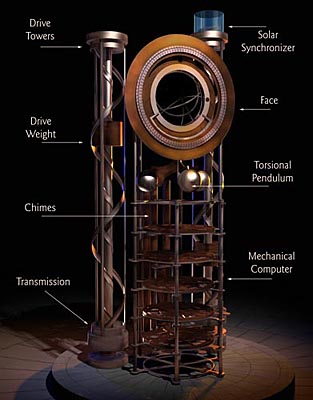 One of the many good things that The Long Now Fondation does is organize a series of free seminars (email list) in the San Fracisco area. I've wanted to attend many of them but have been unable due to scheduling conflicts most of the time. Luckily they're making audio archives of their talks available on-line.

All of our seminars are recorded and archived. This page supplies links to the media associated with each speech (mostly audio). Note that both Vorbis and MP3 files contain the same content, so only one or the other is necessary for download.

If you haven't heard about The Long Now or the 10,000 year clock they're building, here are a few tidbits:

The Long Now Foundation was established in 01996* to develop the Clock and Library projects, as well as to become the seed of a very long term cultural institution. The Long Now Foundation hopes to provide counterpoint to today's "faster/cheaper" mind set and promote "slower/better" thinking. We hope to creatively foster responsibility in the framework of the next 10,000 years.

The term was coined by one of our founding board members, Brian Eno. When Brian first moved to New York City and found that in New York here and now meant this room and this five minutes, as opposed to the larger here and longer now that he was used to in England. We have since adopted the term as the title of our foundation as we are trying to stretch out what people consider as now.

The 10,000 Year Clock is just not going to work. The Long Now people are in the unenviable position of thinking too big at the same time they aren't thinking big enough. They vastly overestimate their technical abilities and vastly underestimate the problem.
The oldest continuously operating mechanical clock is the famous Strasbourg Clock, built in 1574, but the mechanical clockworks had to be rebuilt (and in fact, were almost completely replaced) in the 18th century. It just is not possible to build mechanical clocks with gears that will last even hundreds of years without occasional replacements of worn parts. So how did the Long Now people come up with the idea that a mechanical clock with gears and metal torsion rods would last ten thousand years, when nobody's been able to make metal clock gears that last even 300 years?
Buddhists have a term for a really LONG period of time, a "kalpa" which if I recall correctly, is defined as the amount of time it would take to wear down an enormous rock by brushing it with a feather once every thousand years. Now THAT is thinking BIG. The "Long Now" is short in comparison.

Charles - they're just having fun. No one can say how long the clock will tick. Who will protect it from vandals in forty years? Who will pay to keep a roof over it in two hundred years after a short string of museums gets tired of it? Probably no one. I'm sure they know that.

Indeed, Charles, you're not thinking big enough. If you read the fantastic essay which spawned the Long Now Foundation, you'll see that the Millenium Clock is a thought experiment and lesson in longterm responsibility.

Just where is this "fantastic essay" that spawned the whole thing? I poked around their website and found a bunch of their early essays Stewart Brand published in WIRED magazine, I remember reading those when they were first published and they were a big part of the reason why I stopped reading WIRED, the writers and editors had obviously lost touch with reality.

Perhaps if the Long Now cultists want to ponder eterrnity, they should just admit it's a religious issue and stop dressing it up in techno-utopian transhumanist BS. You want a long term experiment in responsibility? There already was one, someone chiseled stone buddhas into a mountainside at Bamayan, Afghanistan. They may have lasted for 3000 years, but that was a brief moment in the history of this planet. Apparently nobody learned what they were built to teach us.

I embedded a link to the essay, but it got stripped. It's here:

Unfortunately, the images are currently broken on that page, and they include essential bits of text. I've notified Wired, and they replied and said they'd fix the issue.

If you read it, you'll find that nobody wants to "ponder eternity"--that's an idea you've inappropriately applied. Additionally, I didn't term it "a long term experiment in responsibility". I called it "a thought experiment and lesson in longterm responsibility". I think the essay supports this description.

Yeah, I remember reading that Hillis's essay it came out, and thinking that this is the sort of sloppy thinking people do when they spend too much time hanging out with elderly hippies like Brand. It's the sort of glurge I'd expect from someone who stayed up all night getting stoned and watching the cheesy 1960 movie of HG Wells' "The Time Machine."
I don't see the point in doing thought experiments when there are already REAL "experiments" that nobody is paying any attention to. To give you an example, Alex Kerr wrote about backpacking up mountain trails to a remote temple in Japan, and arriving just a few hours too late to see a buddhist icon that was locked away and only on display one day every hundred years. This ritual has been going on for a thousand years. Whole generations of monks have cared for the temple for their entire lives, knowing they will die without ever seeing the icon that is the centerpiece of their religion.

on December 20, 2005 10:31 PM
Disclaimer: The opinions expressed here are mine and mine alone. My current, past, or previous employers are not responsible for what I write here, the comments left by others, or the photos I may share. If you have questions, please contact me. Also, I am not a journalist or reporter. Don't "pitch" me.
Privacy: I do not share or publish the email addresses or IP addresses of anyone posting a comment here without consent. However, I do reserve the right to remove comments that are spammy, off-topic, or otherwise unsuitable based on my comment policy. In a few cases, I may leave spammy comments but remove any URLs they contain.

next
The Powerbook I Want