Just for kicks, I decided to use the BroadBandReports.com speed test to check the speed of the Internet connection as seen by my notebook. 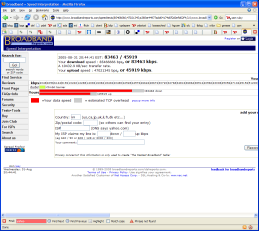 Impressive-now if only more servers had that kind of upload bandwidth you'd be set...

By the way, that screenshot should be the model for Firefox stability-over 20 tabs and still going strong.

No WIFI? Or do you use WIFI Speed Spray?
http://j-walk.com/other/wifispray/

So how do Yahoo engineers get an idea of how real users (on kbps speeds) feel about Yahoo websites? ;-)

> So how do Yahoo engineers get an idea of how real users (on kbps speeds) feel about Yahoo websites?

Dedicate most of that bandwidth to downloading pr0n ;P

>that screenshot should be the model for Firefox stability-over 20 tabs and still going strong.

You'll know when it crashes... the amount of unfinished work you've lost. :)

Not with session saver:
http://www.pikey.me.uk/mozilla/#ss

Has saved me from a many Firefox/OS/power/etc. crash.

I often have multiple windows open, with many tabs.

Umm, isn't that kiloBITS? So you're really getting roughly 10 MB/sec. Not that that sucks or anything...

What, you don't have gig-e? The pipes're a whole lot fatter than that ...

Sad but true. My notebook has gig-e but I appear to be plugged into a 100Mbit switch. :-(

Just teasing. Don't think there are actually any (or many) gig ports outside production.

on September 1, 2005 03:10 PM
Disclaimer: The opinions expressed here are mine and mine alone. My current, past, or previous employers are not responsible for what I write here, the comments left by others, or the photos I may share. If you have questions, please contact me. Also, I am not a journalist or reporter. Don't "pitch" me.
Privacy: I do not share or publish the email addresses or IP addresses of anyone posting a comment here without consent. However, I do reserve the right to remove comments that are spammy, off-topic, or otherwise unsuitable based on my comment policy. In a few cases, I may leave spammy comments but remove any URLs they contain.

previous
What to tell DMA Conference Attendees about Blogs?