Late in the day on Friday (after the hail had fallen), it seemed that a higher than normal number of co-workers were headed up to Lake Tahoe for a weekend of skiing. I had been watching the weather closely and noticed that there was roughly a 16 hour window in between winter storm fronts. And, as luck would have it, most of the time was during daylight hours on Saturday. Keeping and eye on Dr. Jack's BLIPMAP and the FAA San Francisco Area Forecast, I hoped for good soaring.

As I drove down to the airport on Saturday morning, the weather wasn't quite what I'd hoped it might be. There was a lot of ground fog and low clouds as I got past Gilroy and into the Hollister area. But I was committed to fly my glider for the first time in many months.

Things improved after all the glider assembly started. There were clouds on both mountain ranges and the bases seemed to be slowly rising. However, they weren't the well defined cumulous I'd like. They looked ratty and weak.

Nevertheless, I launched a bit after noon and towed toward the east ridge. The bases were at 4,200 feet in places, so I released at 5,2000 to give me a few options for sorting out which areas were working best.

I was surprised to find that the lift was quite good on the sunward (and windward) faces of the clouds. So good, in fact, that one could reliably "cloud surf", gaining altitude along the edge of the cloud. Sometimes it was even possible to get on top of and above the clouds!

After playing around the immediate local area, a group of us ran down the east ridge and back a few times, rarely turning or losing altitude. We surfed the clouds the whole way.

I shot several pictures of my view from the cockpit on my final run down the ridge. See my Cloud Surfing set on Flickr for all of 'em. After that, I hung around locally until hearing that some gliders were crossing the valley over toward Fremont Peak (on the way to the Monterey coast). I followed about 20 minutes behind and made excellent progress across the valley, arriving at 3,2000 feet in the foothills.

A new thick layer of clouds was moving in as I began the valley crossing and it was responsible for shutting down most of the convective lift by the time I got over there. I struggled for a little while with Eric and Peter but eventually headed back to the airport as my feet got cold and it became clear that the day was nearly over.

I was mildly concerned that I hadn't landed my ship in a long time, but that turned out to be unfounded. My landing was uneventful. In fact, I was surprised by how quickly I settled back into flying the 304C.

All in all, I had a 3.25 hour flight on a day when I expected about half that. Not bad for early March. 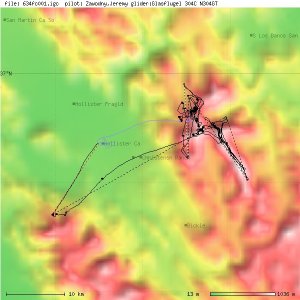 The IGC file is here and the details are on OLC. I'm a bit surprised that OLC managed to credit me 101km for the flight, but I'll take it! :-)

nice photo set. makes me what to take up gliding.

I was wondering what GPS unit are you using?

" ... The weather wasn't quite what I'd hoped it might be. There was a lot of ground fog and low clouds as I got past Gilroy and into the Hollister area. But I was committed to fly my glider for the first time in many months."

I'm not so sure about gliders, but that's a high-risk (bold!) attitude for light planes. I learned a long time ago that if I *had* to be somewhere at a certain time, I'd better plan to fly commercial or drive. When I flew regularly with a co-worker, we made a deal that either of us could veto a flight due to weather, but we were not allowed to try to talk each other into going, so that we wouldn't get sucked into the "gotta fly" attitude that kills light plane pilots.

The fog burned off over an hour before anyone launched. I drove down at 10am but didn't launch until afternoon. It's a common weather pattern in that part of the valley.

That's an iPaq 4705 running SeeYou Mobile and with a CF GPS plugged into it.

I haven't flown in 2 months, almost a record for me.

Last time I went this long without flying, I almost mistook my airbrake handle for my flap handle during launch.

Which CF GPS do you have? Also, does it allow you to still use the SD slot? Lastly, I didn't see it in your photos but have you been flying with your "fish finder"?

That's a Transplant CF GPS that I got from Cumulous Soaring. There's also a 1GB SD Card in the PDA, so yes, you can use both.

I haven't flown with either fish finder yet. But now that I'm flying the 304C again and have a cigarette adapator, it's finally possible. :-)

Cloud Surfing looks like a lot of fun. It must have been the perfect day to try something like this. Looking at the pictures I feel like I was up there too.

Ah,emmm, isn't there something written somewhere about clearance from clouds? Just ask'n.

An FAA DPE once told me that it wasn't a cloud if you could see thru it.

Very cool pics! It sounds like a wonderful day......and as other people commented.....through reading your coments and pics and exhibits, I felt like I lived it with you.

on March 9, 2006 08:41 PM
Disclaimer: The opinions expressed here are mine and mine alone. My current, past, or previous employers are not responsible for what I write here, the comments left by others, or the photos I may share. If you have questions, please contact me. Also, I am not a journalist or reporter. Don't "pitch" me.
Privacy: I do not share or publish the email addresses or IP addresses of anyone posting a comment here without consent. However, I do reserve the right to remove comments that are spammy, off-topic, or otherwise unsuitable based on my comment policy. In a few cases, I may leave spammy comments but remove any URLs they contain.