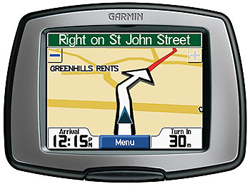 For the last several months, I've been driving with a Garmin Streetpilot c340 GPS unit in my car. I first experienced the utility of this GPS when visiting Taiwan back in November. On the last day of the trip (a Saturday), my host picked me up in his car and had a multilingual C340 that he used to navigate the area.

I was impressed with the size, speed, accuracy, and functionality. It didn't take long before I decided it'd be far better than the navigation software I occasionally used on my iPAQ PDA. I've had it roughly two months and am still relatively pleased.

In summary, it's a great GPS for most city driving. If you've ever used the GPS systems built into some rental cars, it'll take almost no time to get started with the Garmin c340.

Interesting entry. I work as a UI designer for one of the many companies building GPS apps for mobile phones. I know this isn't a forum but I'm wondering how many of Jeremy's readers would consider a handset GPS app over an in-dash or other portable?

I recently purchased Garmin Streetpilot i3 (a cheaper version of the C340) and it works very well too. Good entry level GPS navigation system. The display is a little smaller than the C340, but is still easy to read.

Jeremy--I work at Y! too...anyway, a couple of things to check:

--I have a Garmin i Series GPS (the little brother of the c series you have but otherwise similar) Both the i and c had crashing problems fixed by later firmware releases (downloadable from Garmin). Might want to see if you have the latest.
--If you want to see the route overview, once the C340 has calculated the route, touch the green text bar at the top of the display. You can get more details on any turn by selecting that turn. this is in the manual, btw! ;-)

A handset GPS is a good option if you have two cars and would like to share the GPS between two cars. Not only is it the cheaper option, it helps to have access to your favorite locations in both cars.

On the plus side of the GPS-in-phone apps, they wouldn't require me to use up my cigarette lighter plug the way GPS units designed specifically for mounting in the car do. Also, they're useful on foot.

But it would nevertheless be really cool...and I would definitely be glad to have it when I'm on foot instead of behind the wheel.

Has anyone tried the Garmin Nuvi? As it happens, I've been looking at navigation systems and every review seems to rave about it.

Did you use the c340 visiting Taiwan, didn't know it works in Asia.

Yes. It was bought in Taiwan, in fact. (Not *mine* but the one I witnessed in use.)

last week i got a new software called NAV4ALL which just need to install on you mobile, then everything comes easier. your cellphone could be gps reciever.The program is suitable for many different mobile phones of all popular brands. it's really make you journey easier. the price is 15 percent of TOMTOM

Are they any software enhancements to the C340 that are on a free or trial basis ?

My son gave me the C340 streetpilot for Christmas 2006.
I find the unit to be very functional in northern Virginia traffic.
I am wondering how I can get the GPS coordinates to show up on the screen just in case I need help in an emergency. I travel around the country with trailer and many times I am off the beaten track and might need help either for a Mechanic, Police or a medical emergency. Is their SD card that I can add these features if not avaiable on the c340 as purchased.

I have been wondering that myself. So far I haven't figured out how to do it either. I'd also like to be able to key in a GPS location and navigate to it.

I recently purchased a C-340 and the first time I used it, the text-to-speech (using street names) worked fine. The next day, however, it no longer would use street names ... just "Turn Right in .3 miles." What happened to text-to-speech and how can I restore it (without resetting the whole unit and losing all my stored locations)? Thanks!

I have a c340 onm order. Should i consider the optional antenna as well as a dash mount holder (to replace the windshield holder

I purchased a c340 and am having problems with the "voice". When first purchased it worked fine. Then on a trip I "lowered" the voice on volumn control and now she speaks at times, then she doesn't. The volumn control bar fashes and yellow then black. It looks like a short in the audio control. Has this been a problem. I am in Northern Virginia and this morning she took a while to find herself and then got mad and wouldn't talk. I call her Lola. Anyone else had these problems?

I just bought the Garmin C340 and for some reason it wont find my current location. It keep saying "locating satellites." It's almost a day and still showing Kansas. Is there anything else I need to do after removing it from the box? Thanks for any assistance.

I have the exact same problem. Have you found a solution?

Are you trying to locate it indoors?
If yes, first turn off GPS and then try the maps again.
Its difficult to get the signals indoors.

I purchased a Garmin Streetpilot C340 in Nov, I am unable to get the voice to say the street names, it will only state directions such as turn right in 0.4 miles. Does anyone know if there is anything I can do to fix this. I set the language at the text language option not the voice language option. Any advice will be greatly appreciated.

The C340 StreetPilot comes with a power adapter for the cigarette lighter and the other end goes where?
I don't see where?

It plugs into the suction cup mount.

Will the Garmin C340 Street Pilot display
latitude and longitude coordinates? If so how do I find
them on the display?

How can I view gps coordinates. I want to see latitude and longitude. Will this streetpilot c340 show this if so I need it bad I need for accident scene in case I need to give the info to Air Care medical helicopter. I am a firefighter.

my name aris, i am seeking out possible link partners that our visitors would be interisting in visiting. i've found your website to be a very good fit for our visitors..thanks

i like your articles, this is very useful for information, thanks

on May 14, 2009 04:30 PM
Disclaimer: The opinions expressed here are mine and mine alone. My current, past, or previous employers are not responsible for what I write here, the comments left by others, or the photos I may share. If you have questions, please contact me. Also, I am not a journalist or reporter. Don't "pitch" me.
Privacy: I do not share or publish the email addresses or IP addresses of anyone posting a comment here without consent. However, I do reserve the right to remove comments that are spammy, off-topic, or otherwise unsuitable based on my comment policy. In a few cases, I may leave spammy comments but remove any URLs they contain.