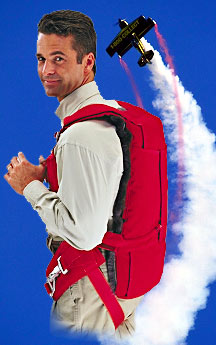 Most people don't know a lot about parachutes. In fact, I'd venture a guess that most pilots don't know much about them either--unless they've tried sky diving. :-)

Before work this morning, I headed up to Hayward, California to fetch my parachute. Like most glider pilots, I wear one when I fly. Mine is a red and white Mini Softie (just like the one on the right) that's rated for my weight range and doubles as a nice back cushion in the glider.

Hayward is where Allen Silver's company is located: Silver Parachute Sales & Service. Allen is an FAA certified master parachute rigger and one of the best in the world. He does parachute training, repair work, sales, and so on (see his website). He also presents and various conferences around the world. And, if you're lucky, you'll catch him jumping out of a plane at an air show near you.

The emergency parachutes we wear are not like those you see sky divers using. Ours are round and smaller. They have less directional control than the larger rectangular models that you might see during an air show.

The FAA mandates that our parachutes be repacked every 120 days. Allen and a few others have been working to extend that to 180 days (in most other countries is 365). But in any case, a repack is just what it sounds like. The rigger pulls the ripcord and removes the parachute from the pack. He or she spreads it out on a large surface to check for damage or wear before putting in all back together in a very methodical fashion.

I've never needed to use mine and hope I never do. But if I do need to use my chute, the $55 that I spend on every repack will be the best $55 I've ever spent!

I didn't realize that. Why do glider pilots wear chutes? Because the chances are higher that they'll be engine-out with nowhere to land within gliding distance? Or because gliders don't offer as much protection in a forced landing? Or?

We wear 'em for several reasons:

(2) few gliders have built in cushions or support, so it's actually more comforatable on long flights.

(3) gliders, by nature, often fly in very close proximity to other gliders. That means there's a chance of a mid-air collision in places where the conditions are exceptional: some of the ridges in the east, the Sierras and Whites/Inyos in California/Nevada, and so on. It's like VORs and power planes. You're most likely to see other power traffic near a VOR (assuming you're not already near an airport).

(4) a number of glider pilots like doing bits of acro now and then, so the parachute is a really good idea when you're blowing off extra altitude at the end of the day with some loops, hammerheads, inverted flight, or whatnot.

Bottom line, though, is safety. Our gliders are designed so we can jettison the canopy and get out reasonably fast if we need to. That't not true of a lot of the light airplanes I've seen.

We wear parachutes so we can jump out if the wind quits. (Just kidding).

An old joke among skydiving riggers:

But seriously, most riggers are ecstatic when skydivers take an interest in how their reserves are packed (and even moreso when pilots are interested). They are usually happy to have you watch, and it is an interesting process. I recommend it if you have a chance.

Of course, some full-time riggers don't have time to slow down their work and explain it. But it's worth a shot.

Skydiving used to be a hobby. Started in Zephyrhills, FL. I packed my main but left the reserve to the club rigger. I wasn't aware of the 120 day max for a repack without use. Seems like 6 or 12 months makes better sense.

When giving rides in a two-seater do you provide a 'chute for your rider too? I do not know how I would react to my pilot wearing a 'chute - would I want one too? What is your experience? Do fares gladly strap one on?

Is that an airplane coming out of your ass, or are you just happy to see me?

Yes, you gotta provide your passenger with a chute if you're gonna wear one. Another reason why they're less common in power planes, which typically have four seats or more, while gliders are at most two seats. Strapping on a chute will add to the adventure for many passengers.

When I was into skydiving, the glider pilots we shared the air strip with would some times come up and ask us to repack their parachutes when they had been accidentally opened. We'd obviously say that we were not qualified to do so (since it's completely different from what we'd use, and none of us were certified to pack commercial parachutes). But, their typical response was "I don't care, I only use it as a seat cushion anyways. Just cram it in there".

WRT (4), not only is it a good idea, it's the law! If you're doing acro in any aircraft, a 'chute is required. What defines acrobatics? Pointing the nose more than 30 degrees above or below the horizon or banking the aircraft greater than 60 degrees wrt the horizon. See FAR part 91.307c[1-2]

I hate to reveal myself as an idiot with training is it possible to pack your own chute? I was a test pilot in WWII and at that time I repacked mine. Gerson

on April 25, 2009 11:41 PM
Disclaimer: The opinions expressed here are mine and mine alone. My current, past, or previous employers are not responsible for what I write here, the comments left by others, or the photos I may share. If you have questions, please contact me. Also, I am not a journalist or reporter. Don't "pitch" me.
Privacy: I do not share or publish the email addresses or IP addresses of anyone posting a comment here without consent. However, I do reserve the right to remove comments that are spammy, off-topic, or otherwise unsuitable based on my comment policy. In a few cases, I may leave spammy comments but remove any URLs they contain.

previous
You cannot buy my traffic...

next
Heading to the mountains for a few days...