For My 31st Birthday: Long Flight and a Smaller Version of Me This past Saturday (June 4th), I turned 31. For the last few years, I've been trying to do something I've never done before on my birthday. Back in 2003 I flew in a biplane. In 2004 I attended the Air Sailing Cross Country Camp and did my first flying in the Nevada high desert.

So far, I'm quite happy with this tradition and hope to continue it indefinitely. I highly recommend trying it yourself.

This year I did two things, the first of which was unplanned but quite fun:

For the second weekend in a row, I was up at Lake Tahoe for the weekend (see last weekend's pictures). My glider is stationed at Soar Truckee for most of the season. The picture below is what it looks like when tied down with the covers on it. On Saturday the forecast looked good, so we headed to the airport prepared for good flights. I launched almost exactly at noon and released near the "hot rocks" not far from the airport. Before long I was high enough to work toward Mt. Rose and then followed a cloud street over to Verdi Peak and from there across the valley toward Air Sailing and Pyramid Lake. I reached my highest point just east of Anahoe Island and then began working my way southward toward the Pine Nuts (the mountain range west of Minden). 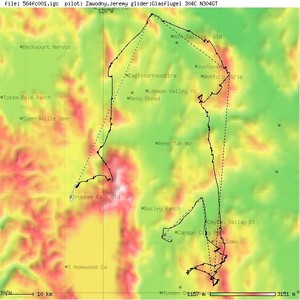 Arriving at Rawe Peak with altitude to spare, I figured I could keep going down the Pine Nuts. But the lift was getting harder to work and I found myself getting lower than I wanted to be. So I stuck around for a while. Eventually I managed to work higher near Mineral Peak. But I never got much above 12,500 feet.

After a while, Darren was headed back in his ASW-19b and we talked about how to get back into Truckee. We couldn't figure a good way back with altitude to clear the ridges, so we ended up landing at Carson City Airport and getting a tow back to Truckee. Later in the day we'd find that nearly everyone had to land at Carson City, so I didn't feel so bad about it. :-)

A larger version of the flight over view is here. Details are on OLC. The flight scored 243.74km (just under 150 statute miles).

Blew Past My Weight Loss Goal

Every January people make New Year's Resolutions that they end up breaking. It was with that in mind that I spent a month trying to figure out what I wanted to do. Around that time I ran across both The Hacker's Diet and Jeff Sandquist's tale of weight loss and finally convinced myself to take it seriously.

I set a goal for myself to drop 30 pounds by my birthday.

Armed with Excel, CalorieKing.com, and a much simplified version of The Hacker's Diet, I set off about the task of actually paying attention to what I eat. And what a difference it has made! I didn't have a scale with me on Saturday, but this morning I weighed myself and plugged it into my spreadsheet (as I do every morning). It tells me that I'm down 37 pounds since I started tracking (Feb 10th). And you know what? It feels great.

No, I'm not hungry all the time either.

On Saturday evening after flying and dinner, we had brownies, ice cream, and chocolate topping to celebrate my birthday. But I was really celebrating the fact that I exceeded my target by quite a bit.

Numerous people at work have asked me what's going on, and my answer is often something like this:

I just eat less. I figured that there are only two ways to do this. I can either exercise more or east less. And, well... I'm lazy. You do the math.

Given how well things have gone so far, I've set a new goal for myself: 17 more pounds by Christmas. I think that's easily doable and it'll put me at a nice round number to boot. From there, I'll keep within +/- 5 pounds for the forseeable future. That should be easy in comparison.

I intend to write up the process in a bit more detail in the coming weeks. Several people have asked me how I do it and what the spreadsheet looks like. I'm happy to share it as soon as I clean it up a bit.

"No, I'm not hungry all the time either."

Yes, but *how* do you eat less without being hungry? (I mean, other than the obvious, like no candy or soda.)

Like I said, I'll write it all up as time allows. I want to do so in a non-halfassed way for a change. :-)

Happy birthday dude, your birthday is the day before mine!

Happy birthday! Congrads on it and I hope you have many more!

Happy B-day Jeremy! We share a birthday though i've got you by 9 years. Congrats on the weight loss. I celebrated my b-day with my first running race in nearly 20 years and managed to run about as fast as i did back then and weigh roughly the same. I love brownies, ice cream, and chocolate too and find that my "laziness" is best manifested by running, hiking, biking, etc. and then i can lazily eat whatever i like. Keep it up!

Happy Birthday!!! and congrats for the loss of weight...as for me...I know it can sound stupid but...if only I was able to gain a little weight...I keep eating junk food but...that just wont do anything

congratulations on the weight loss and your birthday. You might want to consider that the exercise is an insurance policy against several things. Loss of bone mass (yes osteoporosis does happen to men.) Strenghten's you heart and circulatory system, i.e., helps prevent heart attacks, strokes, DVTs, etc. Just a thought.

Happy belated birthday and many congrats on exceeding your weight loss goal. Look forward to seeing the "how" detailed.

Sounds like how I lost weight: cut out the junk, cut way back on the portions, and eat healthy. That means lots of fruits and veggies, whole grains, avoid simple carbs like potatoes and processed grains (white bread, etc.). Works wonders.

You state "I figured that there are only two ways to do this. I can either exercise more or eat less."

There's a third way - change the foods you eat so that your body won't convert the calories in them into stored fat. That's how low carbohydrate diets work.

I'm glad that your diet works for you, but low carb is the fad of the day. It's not a sustainable, long term way to eat (or live).

> either exercise more or eat less

On a completely different topic - wait... you TURNED 31? So you're only three years older than me?

Jeezus, I've done nothing with my life :(

Hello,everyone ,I want to share some experiences with you!! Do you know the quickest way to lose weight? Yes, the quickest way to lose weight is proper diet, good weight loss pills and exercising. Due to the growing number of people who are suffering from weight problems, a lot of natural weight losses supplements are being developed to help you lose weight have. What shall you choose? Surprisingly that only a few have actually proven to be effective. That's why we have created this site to give you the most up-to-date weight loss information, articles, and healthy products reviews available as we understand that. We will offer the best web to you to find the best goods to lose weight! Such as www.2daydiet-green.com there are many kinds of goods to offer, such as 2 day diet Japan ling zhi. I believe you will find the one which fit you! they are waiting for you!

on July 22, 2010 06:32 PM
Disclaimer: The opinions expressed here are mine and mine alone. My current, past, or previous employers are not responsible for what I write here, the comments left by others, or the photos I may share. If you have questions, please contact me. Also, I am not a journalist or reporter. Don't "pitch" me.
Privacy: I do not share or publish the email addresses or IP addresses of anyone posting a comment here without consent. However, I do reserve the right to remove comments that are spammy, off-topic, or otherwise unsuitable based on my comment policy. In a few cases, I may leave spammy comments but remove any URLs they contain.

previous
The Power of Suggestion