I now own a tent.

This has been coming for a few months, but I finally motivated myself to do something about it. Well, that's not quite true. The Best Western in Truckee motivated me.

Gliderports are typically in out of the way places. That's good because it means there are lots of places to land if you can't quite make it back to the runway. Landing on a warehouse is generally frowned upon by your fellow pilots, the warehouse owner, and the aircraft insurance company.

Luckily most of them (the gliderports, not the warehouses) have some sort of on-site camping and reasonable restroom and shower facilities. This is true of both Soar Truckee (situated at an elevation of 5,900 feet and just a few miles north of Lake Tahoe) as well as Air Sailing (about 30 minutes North of Reno, Nevada and just west of Pryamid Lake).

After speaking at SES on Thursday, I'm planning to head up to Soar Truckee so that I can fly with an instructor in our club's DG-1000 early Friday afternoon. It's been about 10 or 11 months since I last flew there (pics) and I'd like to get reacquainted with the area while also getting checked out in the 1000. And I've never flown the 1000 from Truckee.

When I flew up there last year, I stayed at the nearby Best Western. But that costs something like $100/night and can add up quickly. But when I was up at Air Sailing earlier this year (pics), several of us stayed on site in a big RV. I remember thinking that I really needed to invest in a tent so that I could camp out on-site next time I flew there.

I had this notion of taking my glider up there, assembling it, and leaving it in the hangar for a few months. That'd enable me to get in some decent flying without chewing up lots of vacation time. I head up on a Friday, pitch a tent, fly Saturday and Sunday, then drive home on Sunday night without having to (1) deal with glider assembly and disassembly or (2) pay to stay somewhere. And if I used a vacation day, I could head up on Thursday and get an extra day of flying in.

Anyway, when I called up the Best Western to make a reservation, I found that I could stay there on Thursday night, but not Friday or Saturday.

Crap. Time to go tent shopping. (Yeah, there are other places to stay, but I took this as a sign.)

So I headed over to the REI web site to poke around a bit. But I knew nothing about tents (and still know very little). Then I chatted a bit with my sister. She's been camping quite a bit in the last few years. And Joyce offered to loan me a tent, but I really wanted to just get one and get used to using it.

After that, I left work and headed to REI. Upon arriving, the tent section was easy to find. They had many tents assembled (erected?) on display. I looked around a bit and then found the big wall of tent information. Unsure where to start, I got the attention of the cute tent girl (never got her name, sorry) and explained my tent requirements: 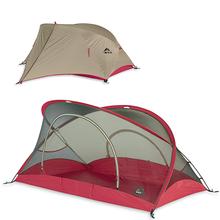 After going over various tents, I decided upon the MSR Ventana Tent and accompanying footprint (a funny word for "thing that goes under the tent to protect it"). It is very light, easy to set up, and has great ventilation and visibility. It's not the cheapest, but it'll pay for itself quickly if I stick to my plans for later August and early September.

And that's the story of my tent.

Now I must set about the task of figuring out how to put it together so I can practice in the daylight.

If all goes according to plan, I'll fly in Truckee on Friday and then head over to Air Sailing with my glider. I'll camp there and fly Saturday and Sunday before returning home. I just hope there's some room in the hangar for my ship!

Nice tent. I didn't know MSR made tents. Their stoves are awesome. REI is a great place to buy this kind of stuff. The one by me has all the stoves out on a table, where you can light them and try them out.

Is that a tent in your trousers or are you just happy to see me?

Nice tent. I can't say enough good about having a tent with a full rain fly and vestibule, both make sleeping in a tent a much better experience than without.

If it's warm and there's no chance of rain, why not just sleep under the stars?

I guess a loan is out of the question then;-)

Looks like a good choice. Remember the REI money-back guarantee... if the tent doesn't suit you, they'll take it back, no problem. REI has been really good about keeping me happy.

REI sells overpriced tents, catering to the people who absolutely have to get top of the line stuff. You should just get one from Target for less than $100. It will last you for years, but may not contain the ultra-light weight materials that an REI tent would have.

I dream of retirement where I "chase the lift". Summering at the great places (Truckee, Driggs, Windemere etc) and living in a (huge "homey") tent.

You're the only guy I've seen try it (although I saw a lot of tents at Truckee when I passed through on a 20-min visit hey I wasn't the driver).

Am I a whacky dreamer or is this tent/fly thing do-able?

on November 29, 2005 06:01 PM
Disclaimer: The opinions expressed here are mine and mine alone. My current, past, or previous employers are not responsible for what I write here, the comments left by others, or the photos I may share. If you have questions, please contact me. Also, I am not a journalist or reporter. Don't "pitch" me.
Privacy: I do not share or publish the email addresses or IP addresses of anyone posting a comment here without consent. However, I do reserve the right to remove comments that are spammy, off-topic, or otherwise unsuitable based on my comment policy. In a few cases, I may leave spammy comments but remove any URLs they contain.

next
Larger SUVs are Illegal on Many California Streets