As a follow-up to last week's launch of RSS in My Yahoo! I'd like to describe how amazingly simple it is to configure MovableType to ping Yahoo's RSS database each time you post to your weblog.

But first I should explain why you want to do that... Simply put, if you ping Yahoo, you content makes it into My Yahoo much faster. Otherwise, left to it's own motivations, the crawler will pull your RSS feed every so often (more often if it thinks you post frequently). 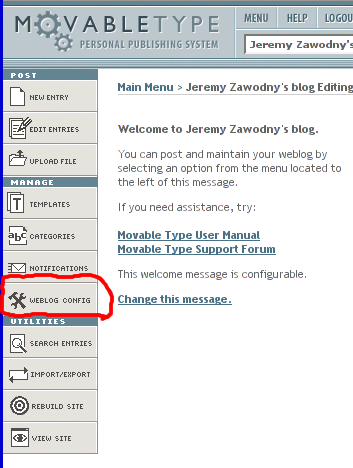 First, you must get to the main administration page in MovableType. It probably looks something like the image above. If you've never seen that before, I can't really help you. Once there, click the "WEBLOG CONFIG" button. To help you identify it, I'd done my best to imitate a 6 year old circling it with an electronic crayon.

Next, you need to click on the "Preferences" link at the top of the weblog config page. Once again, the digital crayon is here to help you find your way.

Then, on the Preferences page, scroll down quite a way until you see the "Publicity / Remote Interfaces / TrackBack" section (shown above). Again, follow the crayon. In the text area, type http://api.my.yahoo.com/RPC2 and save your changes.

Kudos on all the hard work.

So, will you guys be creating a changes.xml with the received ping info?

Why's it called pinging when ping isn't even used?

Ping comes from the sonar "ping" that radar uses to work out if something is there or not. So this, whilst working in the opposite direction, is still a ping.

Not sure if this is important but:
Ping 'http://api.my.yahoo.com/RPC2' failed: Ping error: Unable to process

SONAR and RADAR are two totally completely different things. Sonar sends sound waves, that are refracted and reflected along a given path until it is returned to the sender (via reflection). This can give you a pattern of change over time. SONAR is the only (between these two) one that uses the term PING" becuase it actually sounds like a ping when ACTIVE SONAR is pulsed against an object.

RADAR does not use sound as a mechanism to detect objects. Hence, no PING return like in SONAR

Sorry had to clarify that.

Also - in SONAR, the PING is heard by both sides of the equation, the sender and the sendee.

Now I'm even more confused! So I need SONAR or RADAR to use Yahoo's new RSS service?

I also ping blogrolling.com using the same method. The URL to enter is:

Thanks for the tip Jeremy. I always like to find new places to ping when I make a new post. It certainly helps bring in that traffic.

Isn't it also called PING if something appears on radar?

And since you can also use radar actively, you can even ping other objects (and they can realize they are on radar).

They're called BLIPS on the RADAR screen.

Thanks! This has been a big help and I love this feature of Yahoo.

please send for me the stepes of creating yahoo addres

You might want to check out my post "comprehensive list of places to ping to let the world know you've updated your blog" on my blog about how to blog. The url is http://blogging.typepad.com/how_to_blog/2004/08/ping_services_t.html

Thanks for the walkthrough on pinging yahoo :)

Thanks for your help with pings! I'd just spent a week trying to figure this out and you said it so well.

Getting 403s for the ping URL now.

Everyone is. I pinged the team (no pun intended) and they're working to fix it.

according to http://publisher.yahoo.com/rss_guide/submit.php
the new URL is
http://api.my.yahoo.com/rss/ping?u=[YOUR RSS URL]

But it does not work for me.

I just double-checked http://api.my.yahoo.com/rss/ping?u= on both my index.xml feed and Feedburner feed urls and it worked fine. What was the error that you were getting?

I hope someone is still looking at this thread. I get the error: "Refresh failed. Feed not found: http://www.jdvent.com/rss/genRSS_gelsey_abcdefgh.xml"

The feed is definitely there and I can read it using several different readers. On my "My Yahoo" page the feed says no new items in the last three days even though I update it regularly.

I'm pulling my hair out.

Sorry Don. We've moved the main ping entrypoint to ping.feeds.yahoo.com (instead of api.my). Same path/api as before.

The old entrypoint was supposed to map transparently, but something got messed up. We'll get it fixed asap.

http://ping.feeds.yahoo.com?u= Showing "Sorry, the page you requested was not found."

Avinash: you have to put the "/rss/ping?u=" at the end of the new URL.

Hi! jeremy, i want to know the different between pinging and run, has knowing the difference between the HTML and http. so email me more about the use of ping

on May 9, 2009 01:34 AM
Disclaimer: The opinions expressed here are mine and mine alone. My current, past, or previous employers are not responsible for what I write here, the comments left by others, or the photos I may share. If you have questions, please contact me. Also, I am not a journalist or reporter. Don't "pitch" me.
Privacy: I do not share or publish the email addresses or IP addresses of anyone posting a comment here without consent. However, I do reserve the right to remove comments that are spammy, off-topic, or otherwise unsuitable based on my comment policy. In a few cases, I may leave spammy comments but remove any URLs they contain.