Translations of my blog posts available...

This is a bit of site news, which really doesn't happen a lot around here. File this in the "meta" category, I guess.

My blog is now available in numerous non-English languages thanks to the folks at TechCzar. They approached me a couple months ago about a partnership that'd provide content from my blog in other languages as part of their blog network. In return for that, I've added a banner to the top of the site that contains several links to TechCzar along with national flags that link to the translated content. 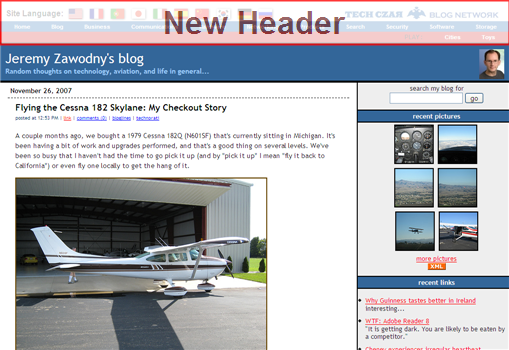 I have committed to try this out for a few months, so I'd love to hear your feedback if you'd rather read my site in a language other than English. Either drop a comment on this post, or email me.

I will also mention the translated content and TechCzar in general a couple times a month, much like other blogs thank their sponsors from time to time.

Just to be clear, they're getting exclusive access to translate my content and host the translated copy on their site. They're also getting links to that from my site (in the form of that new header). I'm getting exposure to more potential readers for the stuff I write and a bit of extra cash each month.

Now back to your regularly scheduled geeking...

The one thing I would recommend is adding an alt tag of the language to the flag. This would make it easier to hover over a flag to see the different languages. This does not really matter for the person who already knows the language they want, but for those of us who do not recognize a flag.

Good point. I'll do that.

Reading the French version of your "Announcing the YDN Hadoop & Distributed Computing blog" post was painful, as it's still always the case with web translations. I can tell you it wasn't translated by a human.

Are you quite sure "TechCzar" isn't just a scam to put ads on your content? Because that's what it looks like to me.

In Response to Martin Plante: I also read the German Blog Posting, and i am also not really impressed. It looks a lot better than Babelfish and similar though, so i'm not sure if it was automatically translated or not, but if it was translated by a human, then i don't think German is his native language.

The idea may be indeed nice, but i'll wait for a few more translated posts. I'll stay with english anyway, no matter how good the translation is.

Interesting to hear feedback on the quality of translation so far. Please keep it coming.

They giving you a cut of the money they are making off the advertising on the translated pages?

Hi, I'm Matt the General Manager of Tech Czar. It's great to read the feedback of this new feature that we've launched.

I can tell you that all of the translation on our site is done by human, professional translators. We don't use any automated translation of any kind. But if the translated content isn't up to snuff, that's something I really want to know about, because I can't read French of German.

So, thanks for the comments, and keep them coming! FYI, you may also leave comments on TechCzar.com under the different translated content so I can get them and make changes more quickly.

The header only appears in the main page, not in the individual posts. If you want to translate an individual post, or look for a language from this entry, you need to go there :)

You might want to give "Flag as a symbol of language - stupidity or insult?" a quick read: http://www.cs.tut.fi/~jkorpela/flags.html :)

Please, don't use flags to indicate language. Why should French be France? I'm a native French speaker, but I'm Swiss. They speak French in Canada, Belgium, certain parts of Africa, and I'm sure I'm forgetting other places.

I've linked to my page on multilingualism instead of the home page of my blog, so head over there if you want to see/hear (literally) me rant about "language!==country".

I like the idea of translation networks, though this kind of formula will only be viable for high profile bloggers.

I had a look at the French translation of your "Yahoo Theater" post. It's ok-ish -- a bit sloppy for a professional translation, in my opinion. Particularly, leaving "theater" as "théâtre" is quite iffy.

For the TechCzar folks - Let me second the recommendation NOT to use flags to convey language. I think best is to use the language (written in the proper language), which TechCzar does in a pulldown. Replace the flags with what is in the pulldown, basically. The German flag should just be replaced with "Deutsch", for example.

on December 6, 2007 03:45 AM
Disclaimer: The opinions expressed here are mine and mine alone. My current, past, or previous employers are not responsible for what I write here, the comments left by others, or the photos I may share. If you have questions, please contact me. Also, I am not a journalist or reporter. Don't "pitch" me.
Privacy: I do not share or publish the email addresses or IP addresses of anyone posting a comment here without consent. However, I do reserve the right to remove comments that are spammy, off-topic, or otherwise unsuitable based on my comment policy. In a few cases, I may leave spammy comments but remove any URLs they contain.

next
Asynchronous Gmail Bugs Me