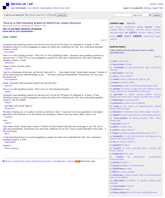 The other day after I wrote There is no Web Operating System (or WebOS), I noticed that a few people had bookmarked it in del.icio.us. This is nothing new. From time to time I see people using del.icio.us to save a reference to something I write, maybe jotting down a note or saving a brief excerpt along the way.

But I checked back a day later to find that a number of people had saved it (31 at the moment) and some of them did make a note of some sort along with it. Reading through those notes, I realized that they really fall into a few groups:

Interestingly, the majority of folks so far who've made any notes about the article did so via #1 above. A smaller number did #2 or #3. So far nobody has done #4, but I have seen that reaction to some of my previous articles.

It occurs to me that with a sufficient number of people bookmarking an article and selecting a short passage from it, I have a useful way to figure out what statement(s) most resonated with those readers (and possibly a much larger audience). It's almost like a human powered version of Microsoft Word's document summarization feature.

That's a pretty cool del.icio.us byproduct that I hadn't really considered before.

The Dragonl and theCodeGirl saves are the only two that are almost exactly the same (except for the NO SHEEIT).

Usually they're almost always straight copies from what I've seen. I often make edits myself (I didn't catch that one until #6), but you can only do so much with the little space allowed...

I follow your delicious rss very religiously,and i find more interesting links (for me) than digg/slashdot, and i enjoy this delicious by product :)

I use del.icio.us/jm as the backend for the link-blog on http://taint.org/ ; the link description is used as the "text" for the link-blog item. In my case, that's where that little convention came from, in general. I can see you do the same over to the right...

Bingo. That's pretty much what I do too. There's a full page dedicated to my linkblog here: http://jeremy.zawodny.com/linkblog/

Regarding #1... The version of the "post to del.icio.us" bookmarklet that I use has the handy feature that if you highlight (select with mouse) text on the page before clicking the bookmark, the highlighted text is inserted in the notes field. I'm not sure if this is available from del.icio.us directly or if I found it elsewhere (I've been using it for ages), but it's very handy. I use it all the time to make sure I can remember why I bookmarked something.

I'm digging this human-powered auto-summarization idea. Now we just need an automated way to get the "most quoted sentence" from del.icio.us back into the blog post, a-la the "saved by X people" info. But you'd have to reach a certain critical mass of redundant quotations before it would really work.

Also, as one of the "right on"ers, I think that expressing agreement on del.icio.us (at least for me) has almost as much to do as the tone of an article as with whether or not I agree with it. Passionate articles like that Web OS one are much more likely to get an amen than something written in an even-handed, unbiased, and...well...boring voice.

on September 3, 2007 03:48 PM
Disclaimer: The opinions expressed here are mine and mine alone. My current, past, or previous employers are not responsible for what I write here, the comments left by others, or the photos I may share. If you have questions, please contact me. Also, I am not a journalist or reporter. Don't "pitch" me.
Privacy: I do not share or publish the email addresses or IP addresses of anyone posting a comment here without consent. However, I do reserve the right to remove comments that are spammy, off-topic, or otherwise unsuitable based on my comment policy. In a few cases, I may leave spammy comments but remove any URLs they contain.