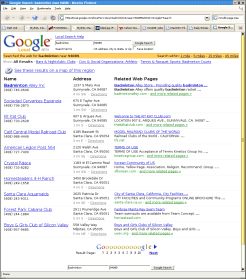 The other day, I was reading Ray's review of what he seems to think is Yahoo's "RSS Reader." While his review is plainly wrong in several ways, that's not what I remember about it. Well, I may discuss that at a later time.

Yeah, I know the service is clearly marked as Beta, but I've become used to Google's definition of Beta...

Let's say you want to use Google's new local search to find Badminton related places in zipcode 94089 (Sunnyvale, where Yahoo happens to be--not far from the Googleplex). The results are preserved in the first screen shot on the right. The full-size version is, of course, easier to read. 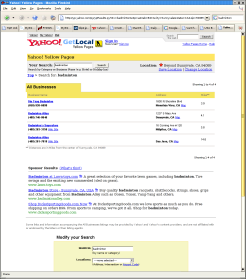 Let's see. Result #1 is good. Badminton Alley sound like just what I might expect to find. Result #2 is "Sociedad Cervantes Espanola." Hmm.

But wait. It gets better!

Result #3 is Kit Kat Club, a strip club. A nudie bar. That sort of thing. Al Bundy would be proud, I'm sure. And result #4 is for a railroad club. Result #5 is for an American Legion Post.

Well, Ray, it may be time to revise your idea of what "Google Beta" is. I know I'm not impressed.

Oh, wait. I forgot. It's Google so it must be good. Silly me. That's what I get for missing my last brainwashing.

Yahoo Yellow Pages, on the other hand, produces highly relevant results when I tell it I want Badminton near zip 94089. Here's proof (second image on the right).

I guess it's all about using the right tool for the job, isn't it? :-)

agreed, right tool for the right job. yp.yahoo has irked me for years, though. try doing a search for 'cd warehouse' and yp gives 0 results- it doesn't even try. google (not local.google) pulls up the phonebook entries for both varients of the store.

local.google does look very much like an alpha- perhaps they need to add that term to their vocabulary.

Is yp.yahoo.com a 'beta' service? I fail to see what this comparison proves.

Just because some fool thinks that in Google-land 'beta' means 'final' doesn't make it so.

That being said, when I'm too lazy to get off my duff and get the dead tree Yellow Pages, I usually fire up yp.yahoo.com. I'm interested to see how this Google local service turns out though.

Maybe he was referring to Google News. It's *still* in beta, though it's felt like a production application to me for a long time.

I think Citysearch fared reasonably well on the same test,

Talking about Al Bundy, look what happens if you search Serial Killer in the same area code. Phew! Quite a bunch!

1. You're really comparing apples and oranges.

yp.yahoo.com is based on the "real" Yellow Pages and only them. So if something in there says "I'm about badminton", it very probably *is*.

local.google.com queries public YP sites, too, but more or less does a common search and narrows it down to places near you. Thats why it's called local.google.com, not yp.google.com.

As many other people on this world who don't live in the US.

Before you pump your chest out too far, Jeremy, your new SmartView technology suggests there are no golf courses within 200 miles of my hometown.

That 4-star Golf Digest course here in town, along with the several dozen other courses in our area, would be shocked to discover they don't exist.

In the end, it's clear neither service is up to speed yet. At least Google has the sense to keep the BETA name on theirs.

I'm looking for good results and pointing out that Ray has an inflated sense of what Google means by "beta". Was that not clear?

If you want good results, use Yahoo Yellow Pages--at least until Google gets their act together.

Where is your home town?

Jeremy you are becoming extremely biased.

Now, now. Where is that fair Jeremy that we all know and love?

Actually, seems like I overlooked the "Well, Ray, ..." paragraph. As the main part of the article (including fluffy screenshots) was about comparing Google's "Beta" to Y!'s "Final", it sounded to me you went the "Ray said G-Beta isn't beta, let's compare stuff and go bashing"-way. Maybe it was the headline which made me think so.

The sentence which troubled me most and what I called "Apples and Oranges" was "Yahoo Yellow Pages, on the other hand, produces highly relevant results when I tell it I want Badminton near zip 94089." Well, Y!'s results are "highly relevant" for you because you implicitly gave another filter to the engine, precisely "look only for stuff in the YPs".

Judging from the screenshot (which I didn't have a look at I admit), were your Google results really crap. Almost none of the results had the keyword "badminton" highlighted. When I had a try, I got a completely different list where "badminton" was all over the place, so "highly relevant" from Google's theory of local searches. (Don't get me wrong, I am not Google brainwashed. Anymore.)

So in the end I think we agree about one point: If Google calls their stuff "Beta", it indeed is. A Beta might feel good at times but can break horridly and nobody will pay you compensation in that case.

on March 22, 2004 03:32 AM
Disclaimer: The opinions expressed here are mine and mine alone. My current, past, or previous employers are not responsible for what I write here, the comments left by others, or the photos I may share. If you have questions, please contact me. Also, I am not a journalist or reporter. Don't "pitch" me.
Privacy: I do not share or publish the email addresses or IP addresses of anyone posting a comment here without consent. However, I do reserve the right to remove comments that are spammy, off-topic, or otherwise unsuitable based on my comment policy. In a few cases, I may leave spammy comments but remove any URLs they contain.