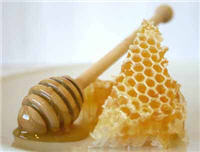 In Honey is better than childrens cough syrups for a silent night we learn that honey is nature's cough medicine. That's right. Put that Robitussin down and grab a honeycomb.

Honey did a better job of reducing the severity and frequency of night-time coughs. It also improved sleep quality for children and their parents.

Seriously. They studied this and found that honey actually performed better than Dextromethorphan, the active ingredient in most over the counter cough medications.

Dr Pauls team observed 105 children and teenagers with respiratory tract infections. The study ran over two nights. On the first, none of the participants was given any treatment. On the second, they were divided into groups who received either honey, an artificial honey-flavoured DM medicine or no treatment, about half an hour before bedtime.

Parents answered questions about their childs symptoms and sleep quality, as well as their own ability to sleep. They rated honey as significantly better for the relief of symptoms. The findings are reported today in the journal Archives of Pediatrics & Adolescent Medicine.

It's funny. My barber told me that raw honey is also helpful in reducing pollen allergies. I tried it a few years ago and found that it worked pretty well for me.

I wonder what else honey is good for?

I've used honey to carbonate home brewed beer. A little honey into the bottling bucket provided just enough sugar for the leftover yeast to react with to provide natural in bottle carbonation.

Using honey to for allergies (pollen, hay fever, etc.) seems to have helped me. I was told to be certain to get the honey from a local beekeeper so the bees are exposed to the same environment as me -- which makes some sense though I don't understand it.

Honey is a recommended treatment for a lot of ailments in Islam:

I'm certain that many other traditional treatments include honey as well, and it is not just limited to the teachings of my own way of life. It's always exciting when scientific study confirms these as well.

Back when I was a music major, a lot of the voice performance majors swore by honey as a way to cut the mucous in your throat. I've tried it since then and it's always worked for me - hot tea with honey is the best treatment for a cold, I think.

I heard if you eat a whole bottle of honey, you trip your face off and have to get picked up from the hospital by your parents.

"Honey as a topical antibacterial agent for treatment of infected wounds": http://www.worldwidewounds.com/2001/november/Molan/honey-as-topical-agent.html and a web search will produce lots of hits relating to its use for ulcers with infections, for example "Topical honey for diabetic foot ulcers" http://www.jfponline.com/pages.asp?aid=1956&UID= (caution: this contains graphic photographs of foot ulcers that may be disturbing).

It notably increased the healing rate for a 9+ month duration injury for me, using honey certified as having the required active ingredient, though results are variable so it's in the worth a try rather than guaranteed benefit category.

This Cedars-Sinai page has useful information on a range of vitamins that may be of assistance, a combination of which also appeared to help my healing rate: http://healthinfo.cedars-sinai.edu/library/healthguide/en-us/Cam/topic.asp?hwid=hn-3568007 .

I'd still have preferred not having a reason to learn about this. :)

Honey makes a great disinfectant for wounds, and was used heavily as recently as WWII. Apparently the sugar content is so high, it kills all the bacteria. So they'd just pack it into any wounds they could and boom, no infection.

I thought it was kinda "duh" as well. I know the most common solution to sore throats in my house was a spoonful of honey with some lemon juice.

Of course, this study was funded by the Honey Industry. God bless industry sponsored science!

It's good for burns too, if you get it on minor burns quickly it can heal them right up.

OT: how well does that spam filter work? I've often wondered why spam filters aren't more based around things only humans could make sense of.

Honey makes for an excellent fermented beverage, called mead, the nectar of the gods. It can be as sweet as raw honey or as dry as champagne, or flavored with all manner of fruits or spices. This is one of my hobbies, so I keep details and recipes up at http://blog.360.yahoo.com/meadblog/

To elaborate a bit on other properties of honey: in the raw state, it contains pollens of whatever flowers the bees visited to make it, thus gives your body a 'safe' dose of allergens, much like getting a flu vaccine.

Growing up back in Blighty (http://en.wikipedia.org/wiki/Blighty), my brother kept two hives of bees so we always had plenty of raw honey. I used it to sweeten my tea and had a teaspoon of it every day to help with my allergies. It worked really well. Then my bro' got stung one time too many and swelled up like a balloon. That was the end of the apiculture experiment!

Honey can also cause infant botulism so it is better not to give it to your baby.

I can't believe people haven't mentioned that honey tastes a zillion times better than cough syrup...That makes the experience of using this remedy so much better.

FYI, if you want honey to help you against allergies such as hayfever, you need to eat local honey rather than big chain store bought stuff.

Raw Honey is more effective than liquid or honey that has been heated, blended, and processed. Raw Honey has all of the pollen, live enzymes, propolis, vitamins, amino acids, antioxidants, minerals, and aromatics are in the same condition as they were in the hive. Buckwheat honey is high in mineral content and antioxidant compounds.

For the longest time you could not give Buckwheat honey away or it was used for baking because of its strong flavor and dark color. Today, it is in high demand (along with manuka honey) because of its medicinal properties. http://www.tenonanatche.com/raw-buckwheat-honey.htm

I use Manuka Honey for my eczema and it works wonders! So normal honey would work as well

on March 3, 2010 05:44 AM
Disclaimer: The opinions expressed here are mine and mine alone. My current, past, or previous employers are not responsible for what I write here, the comments left by others, or the photos I may share. If you have questions, please contact me. Also, I am not a journalist or reporter. Don't "pitch" me.
Privacy: I do not share or publish the email addresses or IP addresses of anyone posting a comment here without consent. However, I do reserve the right to remove comments that are spammy, off-topic, or otherwise unsuitable based on my comment policy. In a few cases, I may leave spammy comments but remove any URLs they contain.