When it came time for my Private Pilot Single Engine Land checkride I decided to make up a simple spreadsheet for the Citabria's Weight and Balance.

It's a requirement that you show the Designated Pilot Examiner (DPE) that the aircraft you're planning to fly with not be over its certified gross weight or outside of the center of gravity (CG) range specified by the manufacturer.

Given that the only variable I can tweak in the Citabria is how much fuel I put in the tank, I put together a simple spreadsheet to answer the question "How much fuel can I legally carry?" 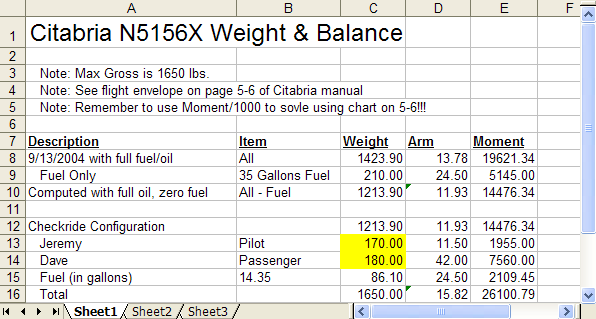 Basically, you enter the weight of the pilot and rear seat passenger in the yellow cells. It will then re-compute the "Fuel (in gallons)" line to show how many gallons of fuel you can carry.

I'm providing this as a simple template for anyone else who may need to do something similar. However, make sure you use the numbers from your aircraft's most recent weight and balance sheet. You can't expect even aircraft of the same make and model (Citabria 7KCAB, in this case) to be the same. The empty weight will depend on any repair work, engine accessories, panel configuration, and so on.

Not to be picking on your post, but there is a typo in the 3rd note on the spreadsheet. It should be 'solve' not 'sovle'.

Maybe the time of the posting has something to do with it?

Thanks, I had made up my own, which was a lot clumsier.

This is my first comment on your site, but I must say that I've thoroughly enjoyed (and found very useful) all your aviation related posts, both for my glider license, and now, as I work on my power rating.

By the way, I think you must have been the most *prepared* ASEL candidate in the history of checkrides!

Ummm - if a *large* person, out of embarrassment, lists their weight incorrectly, does everybody die?

No, there's a surprising amount of safety margin built into a lot of airframe and aircraft limits. But you have to realize that when you push them, (1) you *are* pushing them, and (2) you're flying without insurance and outside the law.

on April 19, 2008 03:02 AM
Disclaimer: The opinions expressed here are mine and mine alone. My current, past, or previous employers are not responsible for what I write here, the comments left by others, or the photos I may share. If you have questions, please contact me. Also, I am not a journalist or reporter. Don't "pitch" me.
Privacy: I do not share or publish the email addresses or IP addresses of anyone posting a comment here without consent. However, I do reserve the right to remove comments that are spammy, off-topic, or otherwise unsuitable based on my comment policy. In a few cases, I may leave spammy comments but remove any URLs they contain.

next
I don't accept calls from people I don't know...