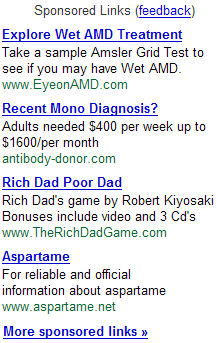 A funny thing happened a few minutes ago. I was reading the latest message in a conversation using Gmail and happened to glance at the contextual advertisements over on the right. You'll see a screenshot of them to the right of this text.

It occurred to me that the advertisements, even the blue "headline" text at the top of each ad, taken together did a good job of summarizing the discussion so far. I'm not saying they were 100% accurate or comprehensive. But I do believe that this particular set of ads is a sort of unique fingerprint that likely represents (or matches) that one conversation out of all those in my email archives.

That makes me think that better methods of conversation search (email, IM, blog comments) must be on the horizon. If the technology exists to create a very small, accurate, and [most importantly] recognizable fingerprint of a set of messages, how long is it before that distilled knowledge will be searchable too?

It's easy to say "show me the conversation that had to do with so-and-so's Dad's health news..." But as time goes on it gets harder and harder to remember any of the real details surrounding the conversation and you become less likely to get the keywords right.

Hmm. There's a gap in need of bridging and I get the feeling that the contextual advertising technology is leading the way, mainly because that's where the money is today. But sooner or later this is going to start to bleed over into more and more applications. And eventually it'll be as commoditized as search technology has become today.

As a thought experiment, what would it be like if you could select an advertisement and then be shown a list of all conversations in your email archive that were relevant. Would that be easier? More fun? Even useful?

I don't know the answer to that.

Images are remembered more quickly and easily than text. If a relevant picture ad (or any relevant picture) was displayed during the discussion, I guess I'd find that discussion quickly if shown the original picture (or picture ad). But textual ads? Nah...

There are systems in place to recognize "intent" for a very long time now. I worked on a system that was able to recognize the real intent (or multiple of those) in a freetext email or message with 97% accuracy. Still, there is a big difference between conversations and webpages. On the bottom line, you are right, we are well on they to achieving that capability.

> As a thought experiment, what would it be like if you could select an advertisement and then be shown a list of all conversations in your email archive that were relevant. Would that be easier? More fun? Even useful?

The way you worded this provided seeds for thought of a better application for the idea. If you can find all the messages which are relevant to an advertisement, you've got the basis for a killer spam filter.

In any event a co-worker of mine was developing such a technology at Stanford back in 1995 and was close to a prototype before the funding was dropped. We did manage to get mailbox 'views' out the door; however it was about ten years before the concept went mainstream.

Your question reminded me of own of my favorite papers from last year's CHI conference - the authors used pretty simple tf/idf tools for visualizing email content. It showed you, for example, a visualization of a full year of correspondence with, say, Chad - popping up the most relevant and unique words for every month. Their sample screenshots are very compelling.
Here it is:
http://www.hpl.hp.com/personal/Scott_Golder/papers/themail/themail_chi_paper.pdf

No word about ads - but wouldn't that be just an easy extension?

Very interesting. Thanks for the reference.

You're right. That does look like an intersting paper and the screenshots do make me want to sit down and read it. It's now on my "toread" list. :-)

on January 15, 2007 06:57 PM
Disclaimer: The opinions expressed here are mine and mine alone. My current, past, or previous employers are not responsible for what I write here, the comments left by others, or the photos I may share. If you have questions, please contact me. Also, I am not a journalist or reporter. Don't "pitch" me.
Privacy: I do not share or publish the email addresses or IP addresses of anyone posting a comment here without consent. However, I do reserve the right to remove comments that are spammy, off-topic, or otherwise unsuitable based on my comment policy. In a few cases, I may leave spammy comments but remove any URLs they contain.

previous
Want to Lose Weight? Eat like an Ape!

next
But it sounds good on paper! Another Diet Fad?