As is often the case, an email message in my inbox had a calendar appointment attached to it. I dutifully clicked the attachment so that Outlook (which I use only for calendaring purposes) would ingest it. This time, however, it refused to do so.

Clearly in need of help, I clicked the "Show Help" button. 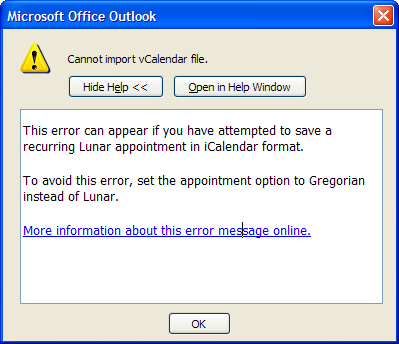 As you might have surmised, that doesn't help at all. I don't know how to "set the appointment option" either in general or in this specific case. Clearly in need of more help, I clicked the hyperlink "More information about this error message online" and hoped to get more information.

Strictly speaking, I guess I got "more" information--mainly some useless metadata about the error.

Is it any wonder that I don't entrust my actual email to Outlook too?

I think all you needed to do here was adapt the keyboard to recognize Microsoft's Gregorian Rokuyou markup language, download the GRML plugin, and learn to write in Japanese.

Sheesh - ya call yourself an engineer?

That error is usually something to do with dates and timezones being something it doesn't understand.

Hey, at least that's a better error message than "You Suck and That Makes Me Sad." but not quite as funny.

I don't even wanna start on everything that's wrong with outlook..

Nice try. Actually, I lost faith in Outlook (and Novell Groupwise, for that matter) before I ever worked at a Microsoft competitor.

Is that message from Evite? If so, you're not the only one:

Nope. It's a from a guy named Fergus. Not even close.

I'm starting to wonder if I shouldn't schedule a lunar appointment. It's been ages since man has set foot on the moon. It's time we fixed that.

You don't mention that the error message doesn't appear to make a lot of sense, either. It's complaining about not be able to *import* something and then directs you to the *save* options (for what appears to be the same product as is importing the file).

The problem seems to violate the principle of not letting you do something wrong, rather than telling you about it. If Office can't load recurring lunar appointments, then it should be clearly labelled "not suitable for werewolves" (there's a tort case waiting to happen) and shouldn't let you save such a case. Waiting until the wings fall off your plane before clearly stating "you are now screwed" seems like bad design.

what's this principle of not letting you do something wrong? I don't like that theory.

To quote a college professor of mine who used to work at adobe:

"My theory of software is like this: I give you a knife. You can butter your bread or stab yourself in the foot. Either way, it's not my problem what you do with the knife."

I know we can argue this.. but I like the "here's a tool use it how you see fit" approach better.

on October 16, 2006 05:58 PM
Disclaimer: The opinions expressed here are mine and mine alone. My current, past, or previous employers are not responsible for what I write here, the comments left by others, or the photos I may share. If you have questions, please contact me. Also, I am not a journalist or reporter. Don't "pitch" me.
Privacy: I do not share or publish the email addresses or IP addresses of anyone posting a comment here without consent. However, I do reserve the right to remove comments that are spammy, off-topic, or otherwise unsuitable based on my comment policy. In a few cases, I may leave spammy comments but remove any URLs they contain.

previous
A Visit to the Hiller Aviation Museum in San Carlos