While wandering my local Trader Joe's this evening to restock my supply of frozen broccoli and little peanut butter filled pretzels, I spied something new (to me) in the frozen isle. 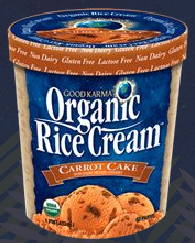 It seems that Good Karma foods makes fake ice cream. And since I'm lactose intolerant, I'm always up for trying a new brand and/or flavor of fake ice cream.

You'd be surprised how bland some of them can be. Or maybe you wouldnt.

Anyway... The flavor that caught my eye was, I kid you not, Carrot Cake. I was more than a little intrigued by this, since I (a) like the taste of a good carrot cake, and (b) couldn't image that they could pull that off.

Much to my surprise, I sampled the supposedly carrot cake flavored rice cream when I arrived home and found that it's pretty damned good. It doesn't have that weird texture and odd melting going on that at least one other brand has going on. But more importantly, the carrot cake flavor was very well implemented.

If you looking for a good fake ice cream and happen to like carrot cake, give it a try!

Just for the record, they also make Very Vanilla, Mudd Pie, Mint Chocolate Chip (which I must try), and Chocolate Peanut Butter Fudge.

the NY Times wrote an interesting piece about the latest technological advances in ice cream recently. Unfortunately its passed into the archive. As I recall the big advance was some kind of arctic fish DNA:

You are a cruel man. I've lost 30 pounds on the Jeremy Zawodny Diet, I still have another 30 to go, and now you're taunting me with rich desserts.

Sounds good. I also don't eat "real" ice cream due to lactose hating me. Now, we just need a Trader Joe's which is supposed to be coming to So Oregon soon.

That sounds so bad, I'm almost willing to try it!

How's the price? And what about the nutritional data? Could you provide some more info for those of us who might be willing to hunt this stuff down if it's worthwhile?

I am lactose intolerant as well. I've been eating these (http://www.turtlemountain.com/products/organic_lil_buddies_vanilla.html) for a couple of weeks and they taste great!

Seb with a name like "Organic Little Buddies" I think I'd feel cannibalistic eating those things.

That does sound a little sketch, but I have to try it now. Here is the nutritional information:
http://www.goodkarmafoods.com/nutritional1.html

Slighlty better than Ben & Jerry's Body & Soul, but significantly better from a conversational standpoint at a dinner party.

you know how there are some things in the world you just don't "get"? Where you seem to be the only person on one side of the fence and you think that side is obvious but everybody else you ask is on the other side of the fence? Carrot Cake is that for me. Love carrots. Love cake. Hate carrot cake. Thanks for listening. Since i've wasted everybody's valuable time with my selfish comment, i will add that Good Karma's other stuff that i've tried has all been absolutely fantastic.

I will have to try this stuff out.

I have been vegan for a year now and when I am craving something sweet I have been going for the Soy Delicious stuff. It is so good! This is my current fav

I'm delighted to see this post. I google away to my heart's content, possibly in ways that Google wouldn't approve. I would have yahooed but I wasn't sure about the etiquette, or is it grammar. Should it be yahoo!ed or is yahooed allowed. That '!' has really spooked me on this one. Perhaps you can let me know what the Yahoo! Style Guide says on this one. :)

What does that have to do with the carrot cake fake ice cream?

Good Karma foods have a pretty good Carrot Cake fake ice cream, still, have you tried the rest? What do you think about the others?

I haven't tried the other yet but probably will eventually.

I did a quick search and found that there is a recall for this brand of ice cream dated Aug 22, 2006. Apparently, there are milk proteins in your rice cream. Sorry.

Actually, the joke is kind of on me. After further reading it turns out it only affects rice cream with chocolate chips in it. This is where the undeclared milk proteins are coming from.

I too am lactose intolerant but *love* ice cream. I've always found the soy substitutes horrible and the rice dream ice cream better but still not crave-inducing. UNTIL... I recently found a line of "ice creams" from a line called Mudslinger's Freestyle that are fantastic. Depending on the flavor, they can be soy milk, coconut milk or almond milk-based. Their 50+ flavors include things like Double Dark Chocolate, Peanut Butter Palooka, and Coconut Rum Raisin, and are vegan. And believe me, I'm the first person who would tell you that any vegan ice cream can't be good... I found a few flavors at Rainbow Grocery in San Francisco (sorry, I think you're only going to find these in the Bay Area). They also have a retail ice cream parlor in Bernal Heights called Maggie Mudd's which I'm dying to visit.
http://www.maggiemudd.com/freestyle/flavors/index.asp?flavor=all

This blog is strange :)
Men write about chocolate ...
About what does it walk here?

My co worker and I are eating the Good Karma Carrot Cake "ice cream" right now and absolutely LOVE IT! Like you said it is very tasty and suprised us with the richness. We purchased it at a Health Food store beside our place of business and the price was $ 2.50 plus NC tax for a pint.

I do not like carrot cake so I don't plan on trying it. I was however walking through the ice cream section of my local grocery store and the Mudd Pie flavor caught my eye. I am not vegan or lactose intolerant but I decided it would be nice to try something different. It is absolutely delicious. I find the taste lighter than any ice cream that has milk in it and I don't feel guilty about eating a lot of it because it is fairly healthy.

This is the best organic, GLUTEN-FREE Dairy free ice cream I have ever had. I can't have wheat so I was amazed to find a carrot cake vegan ice cream that I could actually eat. I thought this was far superior to Turtle Mountain and other Soy based ice creams. Personally, I love carrot cake and the associated flavors and liked this best of all their flavors that I have tried. (The peanut butter chocolate flavor was just mediocre and the "brownie" pieces tasted very wheat-free.)

on May 8, 2008 08:16 PM
Disclaimer: The opinions expressed here are mine and mine alone. My current, past, or previous employers are not responsible for what I write here, the comments left by others, or the photos I may share. If you have questions, please contact me. Also, I am not a journalist or reporter. Don't "pitch" me.
Privacy: I do not share or publish the email addresses or IP addresses of anyone posting a comment here without consent. However, I do reserve the right to remove comments that are spammy, off-topic, or otherwise unsuitable based on my comment policy. In a few cases, I may leave spammy comments but remove any URLs they contain.

previous
People are more interesting than memes, echos, and most gossip

next
Mid-Air Collision of Glider and Jet near Reno: ASG-29 vs. Hawker XP800