When Google first launched their maps with satellite imagery, I immediately began using it as a tool for examining airports and non-airport landing spots.

It turns out that I wasn't alone. The aviation community at large has been all over Google Maps. Having the ability to look at an airstrip and the surrounding terrain (and obstructions) before you arrive is amazingly useful in flight planning.

So when I heard that Yahoo Maps had satellite images coming, I tested it using the test case where Google lets me down: the Air Sailing gliderport in Nevada. It's a remote, out of the way place that most people wouldn't want to look at. But I'm not most people.

Here's what you see on Google Maps: 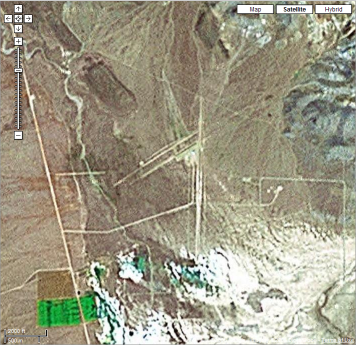 Trying to zoom in farther yields this message:

We are sorry, but we don't have imagery at this zoom level for this region. Try zooming out for a broader look.

Had I wanted a broader look, I wouldnt have zoomed in, right?

Anyway, here's the same spot as seen from Yahoo Maps today at the same zoom level: 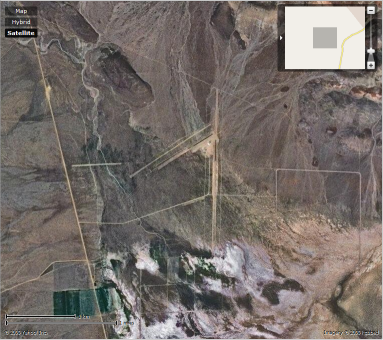 I can still drill down three more zoom levels and get to an image like this: 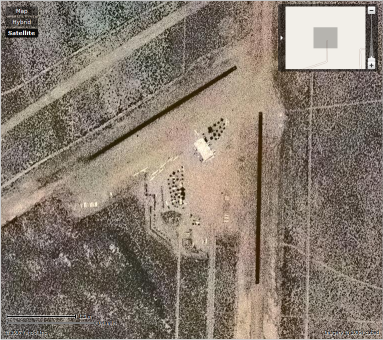 I can better see the clubhouse, the trees, the glider trailers, and so on.

Argh, when I click on the Yahoo Maps link it asks me for a username/password. I wanted to play around with it - guess we mortals have to wait still.

To me the big leap is the amount of data there is for outside of North America. I have never really cared about sat imaging. I grew up in a town called Frederikssund in Denmark, for example. Good luck finding that on Google maps. This is as close as you will get:

Still not real street-level navigation for the rest of the world, but it at least shows you the cities and the major streets and train tracks.

I've noticed that a few areas which Google used to show a lot of detail have been replaced with maps showing much less detail. The area I was looking at was in Tokyo near a number of foreign Embassies. Used to be you could see windows, now the buildings are just blobs. Maybe they are doiing similar things with airport locations.

I do like the re-writing of the URL in the address bar though, and it's much better than MSN's Virtual America, which gives me http://local.live.com/default.aspx?v=2&cp=-33.862433~151.217194&style=h&lvl=9 - distances only in miles! Two clicks (a left and a right) to copy the permalink URL! That annoying redraw of the screen after the tacky zoom-in effect! Argh!

Here is a digg on it:

Can't wait to see what's coming next from the maps team... ;)

Rasmus, Frederikssund is major city compared to Nyråd where I come from and still Y! maps finds it.

In my neighborhood, Google's imagery is far superior to Yahoo's:

And Live Local is even better than Google:

This is all just anecdotal baloney, though, since each service has different resolutions in each area. Anyone know of a more comprehensive comparison?

Hey, the reason some commenters haven't been able to access the URL is because the new Y! Maps is in internal alpha (guess that identifies which commenters are Yahoos...).

So Jeremy is using the old Alpha URL's in his blog post (I'm sure he'll fix tomorrow), but the app is indeed live tonight at http://maps.yahoo.com/beta/

A couple of notes:

This is the tip of the iceberg. We've got some great coverage to get started and now that we have a baseline, we're going to start piling on a lot more data.

While we don't have the ultra-high-rez (yet, stay tuned), we have some pretty serious coverage across the US, and we have some of the freshest data available right now.

Internationally. We have a lot of data coming online in the coming weeks, but we wanted to focus on the baseline layer and release, and then start filling in the high rez stuff.

Unlike everyone else out there, we started from scratch (Terraserver==MS / Keyhole==Google / GlobeXplorer==ASK), and I think we're going to do just fine now that we're in the swing of things and on a serious roll.

I know we have some catching up to do in some areas, but I think that people would find that we've got a pretty solid start and are going in a good direction. I hope you agree.

Google is brutal!
Yeh, i know, the US first... nevertheless, Yahoo! is trailing. ;-)

On the Flash being lame statement above. If you don't like Flash, it is trivial for some definition of trivial to build your own interface using the excellent Maps API. See this example:

No Flash needed there. Or feed it a geocoded RSS file:

The code for this is here:

Yahoo has newer images for my house, but not closer ones. Since it shows the house across the street, I'm guessing they are 6mos to a year newer.

Both put the pin in my neighbor's front yard, though. :)

For my house, I have to vote for Google. The Google image is around two years old but it looks like the Yahoo one is closer to 3-4 years old. This is for NYC metro area. Of course since my actual house is less than two years old, I am out of luck for them both! I still await being able to map my actual address...

Calling Flash lame is lame, this isn't 1999 anymore. Go un-uninstall it in your browser and get on with it!

hi...that is very interisting information...give it from that more sites to read it

In google earth, you can see the ridges that they catch thermals on. Way bitchin'!

I can't seem to find the satellite veiws like Google Earth. It really sucks. They show us images but not the actuall thing

on July 9, 2006 09:09 PM
Disclaimer: The opinions expressed here are mine and mine alone. My current, past, or previous employers are not responsible for what I write here, the comments left by others, or the photos I may share. If you have questions, please contact me. Also, I am not a journalist or reporter. Don't "pitch" me.
Privacy: I do not share or publish the email addresses or IP addresses of anyone posting a comment here without consent. However, I do reserve the right to remove comments that are spammy, off-topic, or otherwise unsuitable based on my comment policy. In a few cases, I may leave spammy comments but remove any URLs they contain.