And they want their error message back! 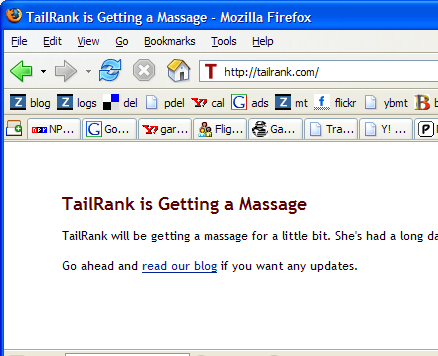 Seriously, you couldn't come up with your own downtime message? Flickr gets a massage, Bloglines has a plumber, etc.

Why don't you get some work done?

And make sure that Zend doesn't sell out to Larry E!

And YouTube has some guy crashed out on the floor hugging a server (they were down this morning for upgrades, apparently).

Fast asleep on the floor next to a server, arhh brings back memories of many a hectic BBC site launch...

*sigh* these errors always take me back to BeOS.

The web site you seek
Lies beyond our perception
But others await.

Wondering when Oracle are going to announce that they have purchased Zend. Numerous people have mentioned that Oracle have employed Andi Gutmans from Zend. Makes you wonder if Oracle have been splashing out the cash with this round of acquisitions?

Hey, the bloglines plumber was actually from eGroups (after the onelist merger)... which Yahoo bought in 2000. The plumber
is yours.

Dude.. My blog from last week called. It wants it's SNL joke meme back!

I was going to say "TailRank is down for some Aromatherapy" but that seemed way too California.

Then I just figured that Flickr can't have a monopoly on this meme for the rest of time.

Maybe I should come up with a better one though. Any advice? I'm ALL ears... seriously.

Over at Simpy I turn Simpy into a Gremlin instead of giving it a massage. Kevin, you can have Furbies, if you want ;)

Furbies are probably copyrighted :)... can't use that.

Maybe I should throw up a game of Ajax pong or something. That would RULE.

When is Yahoo/Flickr going to come clean about the real problems that led to those "Flickr is having a massage" messages? It's already been publicly documented:

We change the offline message... next time we go offline the message will look like this:

(note that we're not offline .. this is just our new message inspired by Jeremy).

It was only a matter of time before some of the 'irony-impaired' took the My Web's message "My Web is at the pub" too seriously, outraged thatthe team was out drinking during downtime...

Hey, the bloglines plumber was actually from eGroups (after the onelist merger)... which Yahoo bought in 2000. The plumber
is yours.

on February 22, 2006 06:19 PM
Disclaimer: The opinions expressed here are mine and mine alone. My current, past, or previous employers are not responsible for what I write here, the comments left by others, or the photos I may share. If you have questions, please contact me. Also, I am not a journalist or reporter. Don't "pitch" me.
Privacy: I do not share or publish the email addresses or IP addresses of anyone posting a comment here without consent. However, I do reserve the right to remove comments that are spammy, off-topic, or otherwise unsuitable based on my comment policy. In a few cases, I may leave spammy comments but remove any URLs they contain.