My company notebook apparently has Symantec AntiVirus installed, 'cause it just popped up an odd dialog box. (Yes, I really ran across this at nearly 4am.) 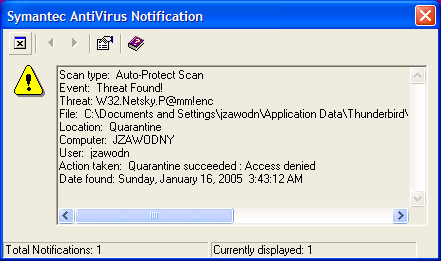 Notice the "Action taken" part? It says "Quarantine succeeded" followed by "Access denied." I'm left wondering what really happened. Did it succeed or not?

I have always wanted to submit something to This Is Broken, so maybe now is my chance. :-)

Heh heh. The link to This is Broken is missing the colon after http, so Firefox is interpreting it as "http://http//broken.typepad.com/". When I click on it it does a search for http on Google and brings me the first result, www.microsoft.com. :)

Presumably "Quarantine succeeded access denied" means that the file the application or user has tried to access has been quarantineed, so you can't access it anymore. Could be worded a bit better...

Yikes. Or "quarantined" even.

I'd want a word with those Symantec chaps. It sounds obvious, but it's worded really really badly. If that's the best they could do, they could always hire me to phrase their error messages. If ya pay, I even spellcheck :)

We (have to) use Symantec Corporate Edition at work and I have been exposed to it for about 5-6years. This error message usually occurs when the file is in use by another program or is itself running. Basically no it didn't succeed.
Thanks for the link to This is broken. Boy do I have some stuff to submit ;-)

Quick search over at symantec gives:

Solution:
In this context, the "access denied" status indicates that Realtime Protection quarantined the file successfully. The program or user that was attempting to access the infected file was denied access to the file.

Hey, you chose to focus your computing time on Windows ... and you're already reaping the benefits of that choice!

Intuitive interfaces, helpful system messages, the need for continuous virus scanning ... all part of the good times that come with Windows as one's platform of choice. Enjoy!

Are you going to submit the entire OS to "This is Broken" or just the dialog box?

Same thing happened to me, and also with a Thunderbird mail folder. In fact, it happened to be my mailbox that Symantec found to be matching a virus definition. And in fact, royally messed up my mail setup, I think I actually lost a day of email because the quarantine didn't work well with the early build of Thunderbird I was running. Since then I've stopped using Symantec Anti-virus, I hate software that does things without asking you if it should do them first. Especially something as serious as moving or deleting files.

I'm with Ivan -- Symantec screwed my Thunderbird mail and I lost a weekend's worth of Inbox mail. It doesn't mix well with NAV, so I put an exception for that directory and it doesn't scan Thunderbird email folders anymore.

...and while you're at it, there's a post for a Y! Travel form that is broken over there as well. ;)

jeremy jeremy! you've gone over to the dark side.... has the Emperor gotten hold of you, or do you need some more Yoda lessons. The force is strong with you - dont waste it - come back over to the good side, where things are open, free and lot more fun...

I understand, but what happens if the clean fails, the quarantine fails, and access is denied? Does that mean nothing can be done about it and Symantec notifies you of viruses indefinitely? That's what's happening to me...

the virus already quarantine. And Symantec AntiVirus has cut the access go to the file. But the virus still exist in your computer.

When I type google.co.in on the address bar, the access is denied. Can u suggest a solution for this problem. please

"I understand, but what happens if the clean fails, the quarantine fails, and access is denied? Does that mean nothing can be done about it and Symantec notifies you of viruses indefinitely? That's what's happening to me..."

I have that problem as well. Symantec Endpoint finds a Trojan horse "APQ1646.tmp" in its own quarantine folder and quarantines it(!), regardless of my settings on what it should do with infected files. And despite me setting the quarantine folder not to be searched. This creates a loop that uses 50-90% of the CPU...

The trojan is originally found in the browser temp internet files folder, but clearing that doesn't help. Neither does clearing the quarantine. Permanently deleting anything quarantined isn't possible, and restarting the computer doesn't help.

on January 13, 2010 05:26 AM
Disclaimer: The opinions expressed here are mine and mine alone. My current, past, or previous employers are not responsible for what I write here, the comments left by others, or the photos I may share. If you have questions, please contact me. Also, I am not a journalist or reporter. Don't "pitch" me.
Privacy: I do not share or publish the email addresses or IP addresses of anyone posting a comment here without consent. However, I do reserve the right to remove comments that are spammy, off-topic, or otherwise unsuitable based on my comment policy. In a few cases, I may leave spammy comments but remove any URLs they contain.

previous
Reference Tracking and the Performance of Technorati, Feedster, and Bloglines