Asa has posted a graph and write-up of the Firefox download numbers. 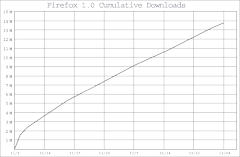 Not bad for a little Open Source project, is it?

The number of users is bound to be larger as most people I know have downloaded it once and installed it on many PCs. I wonder what the acutal user numbers are. Does any one know?

Not bad for a little open source project at all.

I downloaded it three separate times to three different machines (Windows at work, Linux on my home desktop, and OS X on my PowerBook), so I'm not sure how you would relate these numbers to actual users.

I don't know of many "little" open source projects that put two-page ads in the New York Times.

what is interesting to me is how flat the growth is after the first week (because thats probably the most reliable aspect of the numbers  the absolute count is likely not entirely accurate).

i would have expected more of an acceleration in the number of downloads as the marketing and press kicked in.

One way to masure "users" is look at browser share. Mozilla and Firefox are up to 21%. See: http://www.w3schools.com/browsers/browsers_stats.asp

I agree that it's difficult to figure out how large is the user base from some (admittadly incomplete) download statistics.

But an even more interesting number is not what Firefox has gained in the last few months (which has definitely been nice, and at a good clip) but what the total Gecko-based browser share (firefox, mozilla 1.x, camino, others) is.

The newest data we have on that is from the end of November and beginning of December. OneStat says 7.35% and WebSideStory says 6.89%. More tech focused sites like CNet and W3Schools reported 18% and 22.4% respectively.

(I know you can't really mix these different studies, but just for fun, if you look at Global Reach, there are just over 800 million intenet users. Doing the math on that with the onestat and websidestory numbers would put Gecko-browser users at 50-60M.)

I hate graphs like this. There are only two options:

1. The download sites use HTTP caching, in which case they have no way of knowing the number of downloads, and the graph is pretty useless.

2. The download sites disabled HTTP caching, in which case they *still* have no idea as to the usage (cover CDs on magazines, etc), plus they are *wasting money* on bandwidth.

Neither option is very appealing. I can understand the desire to know how many peopel are using it, but I don't see why people insist on spreading misinformation when they don't have real data.

Good Luck firefox and a happy new year 2005!
All the best, Jeremy!

As far as I know, the whole mozilla project is supported by Netscape, so open source is the type of the project, but the support is totally different compared with other open source projects.

on January 13, 2005 05:15 PM
Disclaimer: The opinions expressed here are mine and mine alone. My current, past, or previous employers are not responsible for what I write here, the comments left by others, or the photos I may share. If you have questions, please contact me. Also, I am not a journalist or reporter. Don't "pitch" me.
Privacy: I do not share or publish the email addresses or IP addresses of anyone posting a comment here without consent. However, I do reserve the right to remove comments that are spammy, off-topic, or otherwise unsuitable based on my comment policy. In a few cases, I may leave spammy comments but remove any URLs they contain.

next
Why do Wiki RSS Feeds Suck?