Now that the famous Firefox advertisement has run in the New York Times, I've seen several folks publishing figures for the browser mix hitting their weblogs. 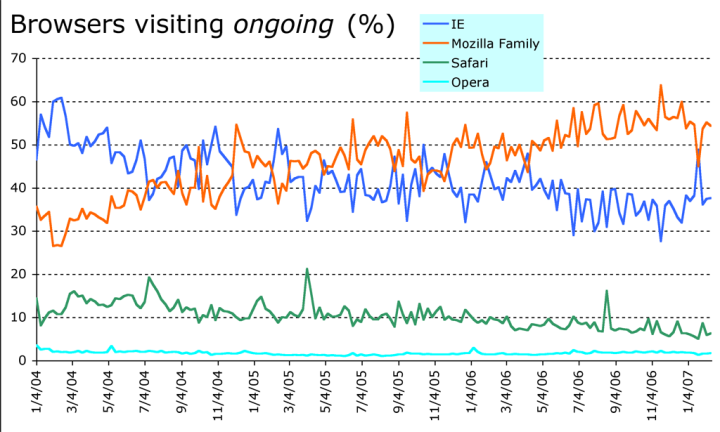 On his site, Safari struggles to hit 10%, while the Mozilla family of browsers (including Firefox) and Microsoft Internet Explorer are battling for first place.

The folks at BoingBoing have posted about this recently and even make their full stats available.

Like on Tim's site, BoingBoing has IE and Firefox nearly tied, while Safari is under 10%.

Earlier today Om Malik (of Business 2.0) posted his numbers and they aren't surprising either. Note that if you factor out his "unknown" hits, Firefox has a healthy share--a bit more than Internet Explorer.

(He didn't provide any cool graphic or chart I could steal.)

So I decided to play with my numbers a bit to see what they look like. The following charts are based on December 2004 traffic to date. We start with the raw data from awstats: 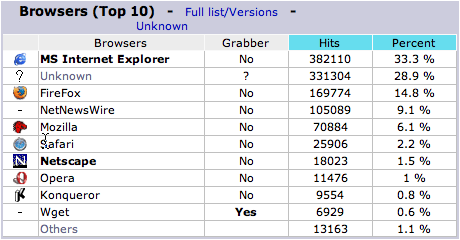 That's interesting. It seems that readers of my blog are a bit less likely to use Firefox than some of the others I've seen. I decided to remove the "unknown" ones (mainly hits from aggregators) and re-computer the percentages in excel: 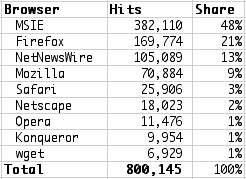 I left NetNewsWire in because I'm not sure if it represents (a) hits to my RSS feeds, (b) hits to my pages, or both. You see, NetNewsWire has an integrated tabbed browser, so those very well could be legit "browser" hits.

Anyway, if we look at this in terms of "slices of the pie" the picture is interesting:

To make the pie easier to read, I tossed out the browsers with only 1% of the share. That boosted MSIE to 50% and left Firefox in second place, followed closely by NetNewsWire. That's worth looking into a bit more.

The numbers look pretty similar to what I've seen elsewhere. I am a little surprised to see LibWWW making it on the list, but whatever. And seeing the "unknown" browser bucket in first place is a little surprising too.

While I didn't spend a ton of time on this, it's clear that Microsoft Internet Explorer is still in the lead. But among weblog readers it certainly does not have the ~90% market share that we tend to think of it having the rest of the world.

Will this picture hold over time? That depends. Firefox may continue to grow. But as weblog readership continues to expand beyond the early adopters, we're likely to see some browsers lose ground to MSIE--at least for a while.

Comparing these numbers to those we see across all of Yahoo's properties shows some dramatic differences. But I strongly suspect I can't share specifics that data other than to say that IE use is much higher and Firefox is lower. Clearly the average Yahoo user isn't using Firefox yet. Is that a reflection of Yahoo, Firefox, or the general population?

It's probably all three. The real question is this: are the weblog numbers useful as leading indicators for the rest of the popoulation? If they are, what does that mean?

A brief test shows that NetNewsWire sends a user agent string of "NetNewsWire/2.0b6 (Mac OS X; http://ranchero.com/netnewswire/)" when retrieving RSS/Atom feeds, and "Mozilla/5.0 (Macintosh; U; PPC Mac OS X; en-us) AppleWebKit/125.5.5 (KHTML, like Gecko) NetNewsWire/2.0b6" when loading pages inside it's browser. It's quite likely awstats is grouping both of those agents together.

May be the firefox users are more wise to check your weblog only when there's a new update (RSS/Ping/Bots...) and not like IE ones to hit your page every one hour. Isn't that true?

are firefox users more likely than ie users to use RSS?

For this to matter though you really need to look at stats from a lot of sites not visited by computer savy users. An extremely large percentage of the people "brwosing" the internet are people who don't really know or care about browsers.

While most of the stats you published here are very promising for Firefox, they are all from sites that cater to a crowd that is more tech savy. Now if you were to get the stats to a more general site visited by people who would "just use whatever works", or like many of my co-workers, not even know what Firefox is, I think you'd get a more accurate picture of the browser usage.

Try seeing if you could get stats from the Yahoo! mainpage, Google, or even MSN.com

Did you completely miss the part where I talked about Yahoo stats?

Do all of these stats come from websites that have caching explicitly disabled or use a Vary: User-Agent header? This weblog certainly doesn't do that.

I don't see how you can derive any meaningful conclusions from httpd logs in this case; you simply don't see a good portion of your visitors as they are downloading from public caches.

ed: "are firefox users more likely than ie users to use RSS?" With Firefox's Live Bookmark feature you can subscribe to a RSS feed and have it updated in your bookmarks, therefore not having to visit the page and thus upping the browser percentage. I've got Jeremy's feed bookmarked, along with 8 other blogs. Since this discussion does not include outside news aggregators (which mostly would be browser independent), my answer in a word is 'yes'.
I wonder if stats are collectable on RSS feeds? I don't know what sort of headers are called in that transaction.

Depending on what one is trying to acheive through looking at the scores also, you could also say that Safari is actually getting closer to 16% of the (adjusted) page views on your site. As Net NewsWire uses the Safari engine for browsing, this would of course, only be of interest to those using this information on how to design their sites I guess.

I guess you just have to decide why you're looking at the information.

I think it's alternatively interesting to see just the base fact that the web is growing past "just" the browser into the more specialized tools, like NNW.

Jeremy, I think you missed what Allyn was saying...They asked about Yahoo's main page results, not the stats just from the search blog.

The average Internet user doesn't know much more about a blog than what they may hear in the news. The information provided really only shows browser adoption based upon a demographic that keep up on Internet "trends" rather than an overall "average".

I'm a Firefox user, but for RSS I use Abilon, that uses MSIE underneath.

No, I didn't miss anything. I was talking about larger Yahoo numbers (in vague terms).

While I'm as interested in web browser stats as much as the next geek, what I'm *really* interested in right now is RSS Reader/Aggregator stats. I've recently posted my own RSS Reader stats, based on my Feedburner a/c, and it reveals that Bloglines has over 50% share for my readers:

I'd be very interested in knowing what your RSS Reader stats say - and indeed other more high profile bloggers than myself, so I can get some decent numbers ;-)

Any chance you could pull a look at what the stats are like for yahoo.com? (or just mail, or search, or personals, or news, or finance...) As the #1 site in the world, it'd give us webgeeks a lot better look into the "real" stats than our little echo chamber of techno-blogs :)

The RSS question is certainly a curious one. Could you grep out the RSS feeds from your results, and analyze them separately from the standard web-page results? Maybe that's what's getting all the "unknown"s? (does the RSS server not log the browser/aggregator info?)

I live in europe and have access to stats from a popular website in belgium used by non geek people.

This post made me curious about the firefox and ie shares. Here is the evolution...

A more detailed view of IE's shares per version shows that there is a general decrease of all the Internet Explorer versions...

you had 28.9% unknown user agents. A lot of these can actually be firefox users who have installed the "user agent switcher" extension. Since there are some websites out there on the internet which wont render the page if the user agent is firefox. They just give you a page saying "please get IE to proceed". Specially some of the web email applications heavy in JS do it.

Some of us have even set the "user agent" in firefox to that of MSIE just to get into sites whose webmasters think they wont render on anything else other then IE, but they actually render fine in Firefox.

Firefox made switching the user agent easy enough to be in the domain of a normal user, and this might actually reduce its weight in the statistics.

The blog metrics are interesting because they represent users who select which type of computer and browser they wish to use. Not so with "mainstream" metrics where the vast majority are dictated by IT.

Of course, it could be said that the decline on IE users on blogs is that more of them are using RSS readers or they switched to Linux, or they got a life in December.

In other words, the data are meaningless as usual. There is no way to account for every aspect of the actual users environment. For blogs you also have to take into account the target market for the content.

I think that this is telling that webdesigners really do need to be following the webstandards. Until recently it really looked like all that you had to do was to code to IE and old versions of browsers and be fine.
Safari and Netnewswire are nowhere on most webdevelopers mind when they code the page, much less firefox.

I have taken a look at the stats from other blogs and they are saying similar things to this report. Firefox is getting ~30% share of the browser usage. btw, take a look at many sites with sitemeter on them. As a note, sites more to the right have a higher IE usage.
I wonder if my current browser shows up as UNKNOWN. I have not updated this machine so I am still using firebird AKA FIREFOX v0.7

For those people asking about yahoo stats. Jeremy has seen the stats and is just saying what he fells is safe to say THANK YOU JEREMY for that! If he reported the real numbers here, he would not be working.

on December 28, 2004 04:03 PM
Disclaimer: The opinions expressed here are mine and mine alone. My current, past, or previous employers are not responsible for what I write here, the comments left by others, or the photos I may share. If you have questions, please contact me. Also, I am not a journalist or reporter. Don't "pitch" me.
Privacy: I do not share or publish the email addresses or IP addresses of anyone posting a comment here without consent. However, I do reserve the right to remove comments that are spammy, off-topic, or otherwise unsuitable based on my comment policy. In a few cases, I may leave spammy comments but remove any URLs they contain.