Orkut takes a step toward being meaningful...

The image to the right is what happens now when you attempt to add a new friend on Orkut. 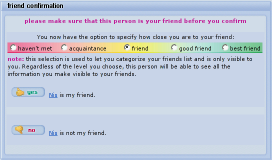 If you're too lazy to look at the larger version, the scoop is that they ask you to state how "closely" you know your new friend:

I'd argue that "haven't met" is completely different than the other four, but we'll see how they use it. And I'm not sure if and how I'd go about classifying the other 142 people already in my friend list. I guess they'll all default to "friend"?

Now if they start to incorporate a few more variables (or relationship attributes), they'll have the beginnings of a FriendRank scheme.

So far this is a baby step, but they're headed in the right direction. I wonder if others will follow--or even try to lead. I wonder if Orkut will let me have more than one "best" friend?

The interface for your friends page is now butt ugly.

It's a step in the right direction, but still not enough to be useful.

Btw mate, is your email working? Sent you a couple, and I hate resending things, but I've been having problems with my mail server so I wasnt' sure...

Ok, how is this really a step in the right direction? Again, what benefit is there for me to not only declare my relationships but also define that relationship?

I've never physically met some of my better friends.What about the people I stalk but who'd rather have nothing to do with me personally?

As it is, most of my Orkut messages have to do with folks looking for work or group messages advertising books or services. I'm actually kind of curious how many active accounts are even going to go through the effort.

I dunno. It still seems as if there's a whole lot of work for little real benefit.

But it's really not there yet. This is hopefully just the beginning.

I had actually forgotten about Orkit for sometime now. I just get interested whenever I see your blogs.
I am not a member yet.( If you wish,you could invite me as someone you have not met).

So,consider this point,whoever is reading your blog and is not a member of Orkit, this tries to invoke interest rather than a discussion.Right?

Speaking of "best friends" and "bestest friends" - is anyone else bothered (or at least made somewhat uneasy) by Orkut's abundance of baby blues and rainbows? If you can think of a web site that looks more like My Favorite Sticker-Adorned Pony Diary, I'd like to see it.

If you're an Orkut user and are looking for a place to vent about the UI, look up the "Tea Parties and Unicorns" community...

Yes, Jeremy, you can have more than one best friend. I've currently got three listed in Orkut.

I think "haven't met" is great-- for all those folks I love via email, but live in silly places like australia and haven't come slept on my couch yet.

What is still missing is people I know but don't actually like.

I hope it does not get congested like friendster ..

I need an invitation to enter in some Orkut, necessary to make new friends, please I invite me.

on September 18, 2004 04:50 PM
Disclaimer: The opinions expressed here are mine and mine alone. My current, past, or previous employers are not responsible for what I write here, the comments left by others, or the photos I may share. If you have questions, please contact me. Also, I am not a journalist or reporter. Don't "pitch" me.
Privacy: I do not share or publish the email addresses or IP addresses of anyone posting a comment here without consent. However, I do reserve the right to remove comments that are spammy, off-topic, or otherwise unsuitable based on my comment policy. In a few cases, I may leave spammy comments but remove any URLs they contain.