Earlier today (March 10th, 2007), Darren Braun and I decided to go chase down a bunch of landing strips for XC flights out of Hollister. This page contains photos of the airstrips we visited, notes for each one, and other observations.

Each of these is listed in the Hollister turn points file. It's best to use SeeYou or Google Earth with a current set of turn points to find each strip. They are rated on a scale of 1-5, where 5 is "I'd land there without a second thought" and 1 is "no freaking way" using my own tolerance for risk and uncertainty. 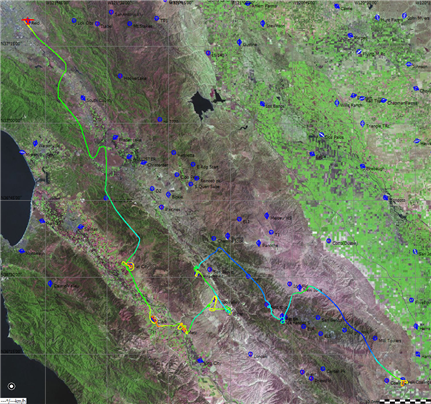 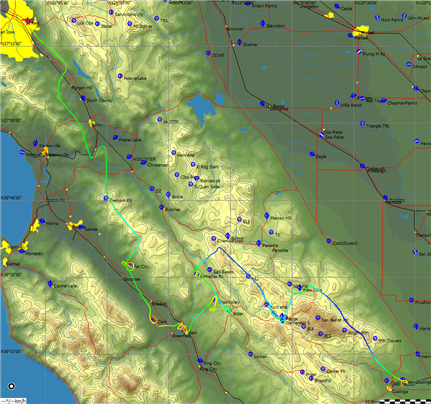 Looks reasonable to land on. There are power lines on approach from both ends and lots of vehicles parked on the end near the livestock. Runway appears to be in decent condition, however, we noticed a fairly large pothole in the middle but the area near the letters "Fat City" looks good. There's also a very nearby dirt strip (in someone's back yard) that had easy road access and a windsock. But this strip was both narrower and shorter than Fat City. Both strips are probably ground retrieve due to terrain and obstacles (hard to tell from the air).

This paved runway appears to be in excellent shape and is plenty long. Ground retrieve would be interesting only because there are a lot of dirt roads and it wouldn't be obvious which one to use. It's a private strip but looks quite fine for an aerotow retrieve.

Drew says: Be careful as this strip is very deceiving from the air. It is nice and paved but very narrow and cut into a vineyard. The stakes are probably 20-21 meters apart and are very solid. A BASA Grob will barely fit but not with a small tractor parked along the edge. The ground retrieve was not bad and I had no trouble finding the strip. There was a vineyard that you found the entrance for and it took you straight there as I remember. The Duo or DG-1000 may fit if you were right down the center with no obstacles. There was also a drop off at the end of the runway that caused some rough air on short final they said. For experienced pilots in 15 meter ships only. Ground retrieve only. The biggest problem even in a 15 meter is that there is no where else to land around it if you do see an obstacle on the runway on base. Vineyards as far as you can see it seemed.

The Metz strip is a long dirt runway right up against the hills with no real obstructions. It has two windsocks and looks to be in good shape. This is an easy ground retrieve and possibly an areotow. The strip appears to be well cared for and is located next to the railroad which can aid in location since an approach from the East would make this strip difficult to spot.

This one is hard to find without a GPS until you're very close to it. Landing here would result in a long ground retrieve possibly behind locked gates and there could be livestock on the runway (we saw two cows on it).

With a name like "Bitter Fields", we originally mistook the nearby fields for the harder to notice aging runway (or old dirt road?). The strip was narrow and hard to judge. I'd rather not be low enough here to have to figure it out. However, the fields located to the SW had a perimeter that was rough plowed and would probably be a better choice than the strip. They are right near the road and are easily visible from El2, particularly the plowed portion.

The Pinnacles strip has a white "X" at each end of the runway and appears to be in poor shape and fairly rough. The hangars on the field look to be empty, as if nothing has flow in there for years. Avoid it if you can.

The Kurz strip (just north of Hernandez) looked to be free of major obstructions, but we didn't' get low enough to have a really good look.

Drew says: This strip would be a little challenging for the set up but easy for an experienced pilot. The runway was nice about 8 years ago when I was there. It would be ground retrieve only but this may even prove to be difficult. We flew in so I did not get to see to the road but the owner said it went through a creek and that a trailer may not be able to get across. You have let your self get in a bad spot if you need to use this strip instead of Rocky's.

Rocky's strip looks to be in good shape. We saw an airplane parked at the end of it, so it must be seeing somewhat regular use. It looks like a nice uphill landing with areotow potential.

Drew says: Do not forget to watch for the Buffalo. They are friendly he said but will lick your gelcoat off if you leave the glider alone. If it is a PW-5 be careful. They have been known to get bulls in Florida excited. Not sure about buffalo. Rocky will let us aero retrieve from there. If there are too many Buffalo on the runway then change over to Hernandez south.

Hernandez South looks to be in similar condition to the last few seasons. There was a big gathering of what looked like campers and motorcycles down there, so one would hope that they've cleared junk off the runway.

Drew says: No aero retrieves. This may change though.

This strip is hard to judge without walking but looks like you could land there without breaking too much. But it's probably best not to get low back there in the first place.

We stopped for a nature break at the New Coalinga airport. It was blowing at 15 knots down runway 01 (the shorter cross runway that's not nearly as smooth as the main runway), so we didn't stick around wrong. The gate combination is still 1906.

Near "Cibo Peak" is what looks like an old windsock frame and an airstrip that's more of a grass road at this point. It's hard to tell how rough it might be, but it looks like a reasonable place to set down if push comes to shove if the burm on either side isn't bad.

Drew says: I landed here a few years ago in the Duo. It was nice but had higher edges and higher grass than I had hoped. Glad I was in the Duo rather than a pegasus. When I got out I noticed a deer and her fawn standing about 100 feet down the runway just staring at me. I had not been able to see them because of the tall grass. Glad I got on the brakes hard. The rancher said the cows now use it as a path. I would suggest landing in a cut hayfield in the big Quien Sabe valley first. If you do end up in the valley you should try to see if they will take you up to the main ranch house. It is a beautiful old Spanish style mansion hidden in the trees. They are very nice people and will leave you by the main gate to let in your crew and just ask you to lock it on the way out.

The following are strips/locations that I'd like to look at some time but we didn't have time for:

Thanks to Darren for taking notes, flying along, and shooting some of the pictures.